Stitch, also known as Experiment 626, is a minor character in Kingdom Hearts II, Kingdom Hearts Birth by Sleep and Kingdom Hearts III. He was originally found in Deep Space on a prison ship, where he allied with Terra, Ventus, and Aqua as a party member and Dimension Link, but eventually escaped and made his way to Radiant Garden, where he fought alongside Sora and his friends in the Battle of the 1000 Heartless. Afterward, he joined them as a Summon. He originated from the Disney film, Lilo & Stitch.

Terra, having released an imprisoned Dr. Jumba to find Experiment 626, soon finds him encased in an experiment pod. Jumba explains 626's power to Terra and proceeds to release him in order to display it. 626 shows greater interest in Terra, jumping onto and climbing all over him, stealing the Keyblade wielder's Wayfinder in the process. Jumba finds it hilarious that Terra would think 626 would listen to his pleas to return the charm, though he is greatly surprised when the little Experiment does so, fleeing the chamber in which he was contained. 626 subsequently returns, and Terra attempts to reach out to him, but is cut short when the alarms go off.

When Aqua arrives in Deep Space, she is attacked by several Unversed. Finding a peculiar object in the shape of one of her good-luck charms, she studies it only to have it snatched back by Experiment 626. Angry with Aqua until he notices her Keyblade, he then runs with the approaching sound of Gantu's voice. Discussing 626 with Gantu and later meeting the Grand Councilwoman, Aqua is sent on a mission to eliminate the Unversed present in the world, as well as capture both the escaped Experiment 626 and Dr. Jumba. In the process, she finds 626 in the prison chamber, several Unversed prepared to ambush him. Aqua comes to his rescue, asking what the Experiment was doing in the chamber. He utters only a single name, "Terra", fleeing the chamber before Aqua can interrogate him further. Aqua later learns from the Grand Councilwoman that Jumba and 626 are now on the ship's docking bay, the Keyblade master going to them only to be attacked by Gantu. 626 and Aqua team up to defeat the alien Captain. Aqua later persuades the Grand Councilwoman to reconsider Experiment 626's sentence, as he has appeared to have learned the true value of love and friendship through the charm he made as a tribute to the one Terra had during his visit.

Stitch and Ventus run from Gantu.

When Ventus arrives in Deep Space, he is attacked by a massive Unversed, pursuing it to the Grand Councilwoman's ship. Meanwhile, Experiment 626 has been recaptured, Gantu taunting only to be interrupted by an intruder. Told to stay put by Gantu, 626 uses his superior brain to escape his binds, the guns trained to fire only at him used to create a doorway and set the Experiment free. Gantu thinks Ventus is the intruder and initially does not believe his stories that it was a monster that was causing the trouble the ship was encountering. Ventus continues to pursue the Unversed that attacked him only to run into Experiment 626. He learns from the Experiment that he knows Terra and Aqua, 626 showing him his hand-made good-luck charm. 626 then attempts to follow Ventus in the trail of the Unversed, told to stay behind.

Waiting for Ventus, 626 stands in the chamber with his precious charm, only to have it destroyed by Gantu, who says the Grand Councilwoman has reconsidered 626's sentence, Gantu not fooled by 626's apparent change in personality. When Ventus finally catches up to the massive Unversed, 626 appears before him, aiding him in the battle. Experiment 626's rage becomes uncontrollable during the battle, however, causing the small extraterrestrial to attack Ventus, who soon learns that 626's charm had been broken. Gantu soon appears and explains 626's destructive nature, the Experiment and Ventus flee as Gantu orders their capture. 626 goes on to steal a red police cruiser, Ventus following him on his Keyblade Glider. Experiment 626 activates the cruiser's faulty hyperdrive in order to escape his pursuers, and leaves Ventus behind in a blast of energy as the ship vanishes at light speed.

Some time after Xehanort's defeat, Experiment 626 gets his Wayfinder fixed and puts it on the steering wheel as he flies his ship towards a blue star.

Later, he crash lands on an island, where a young girl named Lilo picks him up.[1]

When Sora, Donald, Goofy, and Leon went into the corridors leading to Ansem's Study; Stitch crawls above them without them noticing. Later, he drops down onto the keyboard of the computer. Donald jumps onto the keyboard to grab him, but Stitch jumps off with a laugh. As Donald turned around, he mashes the keys, causing the Master Control Program to be alerted.

Later, Stitch helps fight in the Battle of the 1000 Heartless in the Great Maw, using his blasters.

Stitch appears as a summon. He can be summoned after obtaining the Ohana Heartbinder. 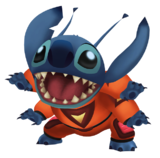 In his own words, "cute and fluffy", Stitch is coated with blue fur with darker patches on the back of his head and on his back as well. A domed nose rests in the center of his face, between large black, tear-shaped eyes. Sharp teeth reside in this extraterrestrial's mouth, along with a long pink tongue. He has clawed hands and stubby legs that have shorter claws themselves. A short tail juts out from his rear.

When in his true alien form, Experiment 626 retains his basic appearance mentioned above, but sprouts an extra pair of arms, spikes on his back, and antennae. He also dresses in an orange uniform.

His name is drawn from his creation, as he was Dr. Jumba's 626th experimental creature.

As a Link Summon in Kingdom Hearts III, Stitch appears in a bright purple plasma texture.

Upon his creation, Experiment 626's only purpose was to destroy everything in his path. He would laugh at the chaos he caused, taking pleasure from harming others. However, his time with Terra, Ventus, and Aqua changed this, much like it did in the Disney film upon Stitch's encounters with Lilo.

In Kingdom Hearts II, Stitch is shown to still take pleasure from the annoyances he causes, but knows the difference between right and wrong, fighting against the Heartless with Sora and friends. He is very loyal to those he cares for, regardless of his past. While unknown what sparked this change in behavior in terms of the Kingdom Hearts storyline, it is likely that Stitch reformed some time between Kingdom Hearts Birth by Sleep and Kingdom Hearts II.

Stitch can be summoned in a battle using the Ukulele Charm. Stitch is unique as a summon because he does not actually enter the field when summoned; he instead jumps and crawls around the HUD features, occasionally licking the screen. After the summoning scene, Sora tries to follow him, but comically hits the "TV screen" and returns to the game. Stitch stays on the HUD and does most of his actions from there.

Stitch is a powerful summon. If the HP or MP bar is low, Stitch fully restores it by licking the gauge. He can deflect incoming enemy projectiles, effectively protecting Sora from damage. He will also bring out his ukulele, stunning enemies in midair and causing them to drop prizes. Additionally, he may randomly turn away from the screen and shoot enemies with his blaster, dealing damage. His limit is Ohana!, in which Sora uses the Keyblade as a guitar while Stitch plays his ukulele, evoking prizes or causing harm.

After helping Stitch out, he becomes a summon through the D-Link.

His two Finish moves are:

Stitch can be summoned in battle using the Ohana Heartbinder. It is obtained by completing the first Flash Tracer course in San Fransokyo. Stitch's Link is known as Plasma Encounter. Sora and Stitch can build a force field and then activate its power.

Stitch originally appeared in the animated Disney movie Lilo & Stitch. He was created by Dr. Jumba Jookiba. Illegal Experiment 626 was brought before the Galactic Council during Jumba's hearing. Branded a monster by the Grand Councilwoman, 626 was taken upon a ship set for a deserted asteroid, where the alien would be banished. 626 managed to escape, but however landed in Hawaii on Earth. The Grand Councilwoman dispatched Agent Pleakley, Earth Expert, along with Jumba to reclaim him.

While on Earth, 626 was mistaken for a "dog" and adopted by six-year-old Lilo Pelekai and was named "Stitch". Stitch at first sought to fulfill his primary function of destroying anything, but learned to be good through the teachings of Lilo. He protected her when Jumba and Pleakley attempted to recapture him, persuading his creator to aid him in saving Lilo from Captain Gantu, who had also been hired to capture Stitch when Jumba and Pleakley failed. In the end, Stitch was captured by the Grand Councilwoman herself after rescuing Lilo, but was allowed to stay on Earth.