The Datascape is a Data World created when King Mickey digitized the contents of Jiminy's Journal in order to solve the mysterious messages that appeared in it. The worlds within are, for the most part, the same as their real counterparts, which Sora visited during the course of Kingdom Hearts. They appear in Kingdom Hearts coded, and its remake, Kingdom Hearts Re:coded. 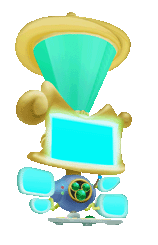 The computer in Disney Castle.

The datascape is created when King Mickey digitizes Jiminy's Journal in order to find out the secret behind the mysterious message. As the simulation is constructed, Bug Blox begin appearing within it. King Mickey decides to create Data-Sora to explore the journal and eliminate the bugs, and focuses on monitoring the situation from a console in the castle Library.

Early on in the simulation, Data-Riku secretly pulls Mickey, Donald, Goofy, and Jiminy into the datascape in order to help solve the mystery—but unintentionally brings Pete as well, as he had been spying on them. They remain unaware they have been brought in until shortly after the investigation of Wonderland's data is completed, when the Library is locked down, Heartless begin appearing, and Data-Sora stumbles upon them. While Chip and Dale work to get in touch with their friends inside the simulation, Pete notifies Maleficent and the pair hatches a plan to conquer the datascape, and start by seizing the path back to the real world—an obstacle that Mickey and his friends soon find out, to their consternation.

After Data-Sora completes the investigation of Olympus Coliseum, the team discovers that the culprit was Pete, who Data-Sora follows to Agrabah. After tracking him down, the team learns of Pete and Maleficent's plans for the datascape.

Maleficent sends Diablo to King Mickey to show that she is holding Queen Minnie hostage, and once he arrives at Disney Castle, Maleficent reveals that Master Xehanort told her about the seven pure hearts of light, and demands that the King hand over the datascape, still set on using it to further her plans.

Later, Young Xehanort reminds Sora of the times he's been in Traverse Town. He refers to the Traverse Town "in the datascape", although it is uncertain what Sora knows about his data counterpart and his journey.