From the Kingdom Hearts Wiki: A world of information not accessible by Gummiship
(Redirected from Seekers of Darkness)
Jump to navigationJump to search 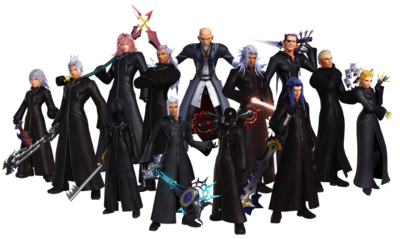 The members of the real Organization XIII.

The real Organization XIII (真のXIII機関, Shin no Jūsan Kikan?), also known as the thirteen seekers of darkness (13人の闇の探求者, Jūsannin no Yami no Tankyūsha?) or simply Organization XIII or the Organization, is a group consisting of thirteen different incarnations of Master Xehanort who seek to reforge the χ-blade and unlock the original Kingdom Hearts to remake the world. They serve as the final antagonists of the Dark Seeker Saga.

The true purpose of the original Organization XIII led by Xemnas was for each of the Nobody members to host a fragment of Master Xehanort's heart, turning them into clones of Xehanort, but the members' unforeseen independence made this goal impossible to realize. However, in anticipation of this failure, Master Xehanort had arranged to send Ansem, Seeker of Darkness back in time to his youth, to meet Young Xehanort and become a portal[?], traveling to different periods of time and gathering different incarnations of Xehanort who would be added to the ranks of a new Organization.

Due to the time-traveling nature of many of the hearts comprising the Organization, future members first appeared in Kingdom Hearts with at least one making an appearance in every game since. As a group, it was first alluded to by Yen Sid in Signs of What's Next when he claims that one Keyblade Master will not be enough to counter what is "not a single one of Xehanort", before making its official introduction in Kingdom Hearts 3D: Dream Drop Distance.

Unlike the original Organization XIII, the real Organization XIII is not composed exclusively of Nobodies; some of the members are complete people, while others are time-traveling hearts hosted within replica bodies. Despite full knowledge of the purpose of this new Organization, many members use it as a means to fulfill their own independent goals, rather than out of loyalty to Xehanort.

Before Kingdom Hearts Birth by Sleep[edit]

Xehanort meets Ansem, his Heartless from the future.

Young Xehanort was visited by his future self's Heartless Ansem, Seeker of Darkness and told of the great plans Master Xehanort has in store. Given his task, but limited by the rules of time travel, Xehanort left his body behind and journeyed into the future to make contact with the right hearts needed for the backup Organization.

Young Xehanort recruited Vanitas, whose heart is incomplete, and brought his heart with him. Kingdom Hearts III Re Mind

Young Xehanort arrived after the creation of Terra-Xehanort, and collected his heart as well. Kingdom Hearts III Re Mind

At some point prior to his defeat at the World of Nothingness, Xemnas's heart is collected by Young Xehanort so he can be made a member of the real Organization.

After Ansem, Seeker of Darkness takes his own form from Riku's body, his heart is collected by Young Xehanort.

Young Xehanort arrived in the days after the original Organization XIII finished filling its ranks. He collected the heart of Xion, before her personality had taken shape.

Once the Riku Replica was brainwashed into believing himself the real Riku, Young Xehanort collected his heart as well.

With the demise of Ansem and Xemnas, both Terra and Master Xehanort are re-completed as separate beings. However, Terra’s heart is still trapped inside Dark Figure, thus allowing Young Xehanort to implant Terra-Xehanort's heart into him.[1]

Young Xehanort arrives at the Heartless Manufactory just as Ansem the Wise's apprentices revive, and before they awaken. He wakes Braig and informs him that, due to the failure of the original Organization XIII, the real Organization XIII must be completed. Braig agrees to be turned back into his Nobody, Xigbar, and they select Isa to join as well, in the form of Saïx, before leaving.

The real Organization XIII gathers together for the first time.

Shortly after being revived, Lauriam and Elrena, as well as Demyx and Luxord's original selves were approached by members of the new Organization and agreed to become Nobodies again.

Although Even was also revived, he remained comatose due to the grievous wounds Axel had inflicted upon his body when he destroyed Vexen.[2] Once he finally awoke, he was approached by Saïx and invited to return to being Vexen, under the pretense of continuing his research on replicas, while in truth plotting to sabotage the Organization's plans to absolve the pair's prior misdeeds.[3]

With Vexen's stock of replicas, Young Xehanort was able to deposit his own heart, as well as those he had collected from the past, into new bodies, allowing them to begin operations.[4] Vexen and Demyx were demoted to reserves,[5] while with their new bodies, Ansem, Xemnas, Young Xehanort, Vanitas, and the Riku Replica, now called "Dark Riku", work together to put Master Xehanort's plan into motion, interfering with Sora and Riku's Mark of Mastery exam within the Sleeping Worlds in order to lure Sora to The World That Never Was so that they can abduct him and make him one of Xehanort's vessels.

Having baited Sora to The World That Never Was, Young Xehanort is aided by Xemnas and Xigbar in trapping the Keyblade wielder deep within the abyss of sleep. Afterward, he ferries the boy to Where Nothing Gathers in the real world and convenes eleven of the Organization's current thirteen members, excluding Xion, Vexen, and Demyx[6] to await the completion of Master Xehanort's revival.

Master Xehanort attempts to make Sora into the final vessel, but when Sora is rescued by Riku, Mickey, and company, the Organization disperses to their proper times,[?][7] while Master Xehanort remains confident that in time he will complete his Organization.

Members of the real Organization are dispersed across different worlds to complete different tasks and antagonize Sora, Donald, Goofy, and their allies. While Sora rescues Aqua and Ventus to complete the Seven Guardians of Light, the Organization also fills out its ranks. Because Master Xehanort was unable to make Sora his final vessel, he instead recreates Xion by using her heart from recorded data to take his place as the thirteenth member. Kingdom Hearts III Re Mind[8][9]

All thirteen members of the real Organization confront the opposing guardians at the Keyblade Graveyard, sending endless armies of Heartless, Nobodies, and Unversed to test their worth. After their opponents managed to survive the waves of monsters, Master Xehanort and his newly formed Organization meet them at the crossroads for the final showdown. He creates a maze and dispersed the members into different groups to fight the guardians.

One by one, the Organization members are defeated. Terra-Xehanort's heart is set free by Sora, allowing Terra's heart to return to his body and sending Terra-Xehanort's back to its own time. The hearts of Young Xehanort, Ansem, Xemnas, Vanitas, and Dark Riku are likewise sent back to their own times, while their replica bodies are destroyed, with the exception of Dark Riku's – Riku Replica removed Dark Riku's heart from the body, allowing Naminé to use the now-empty replica to return to life. With the help of Roxas, Xion's real heart leaves Sora's and takes over the replica body mid-fight, causing Xion to defect from the Organization. Saïx, Luxord, Marluxia, and Larxene are all eliminated and subsequently recompleted as humans. Master Xehanort is the last Organization member to fall, departing for the afterlife upon defeat.

Although Xigbar was presumed to have died, he merely departed the battleground after his defeat.

One year following Xehanort's defeat and Sora's disappearance, Riku goes to visit Squall Leonhart, Yuffie, Aerith, and Cid to have them help in their search for Sora. Cid reveals he has put together a program that would allow a data-based version of Sora to battle against the data-based copies he created of the members of the real Organization XIII, hoping that doing so would provide them with a clue into the real Sora's whereabouts. However, the plan ultimately fails once these battles have concluded, putting the group back to square one again.

By the time the real Organization XIII is ready to re-enact the Keyblade War, they are composed of thirteen active members, with two additional members serving as reserves. Finally, Vexen's original twelve prototype replicas are kept as a last resort as Replica Xehanorts, to replenish their ranks should the need arise.