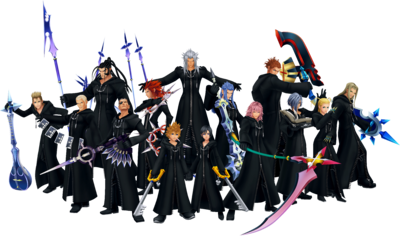 The members of Organization XIII.

Organization XIII (XIII機関, Jūsan Kikan?), sometimes simply called the Organization, is a group of thirteen powerful Nobodies led by Xemnas, who seek to reclaim their hearts and become whole again by creating Kingdom Hearts. Although the group only has thirteen "true" members, it includes a fourteenth pseudo-member, Xion. They serve as major antagonists throughout the Dark Seeker Saga, with their members appearing in every game except the original Kingdom Hearts and Kingdom Hearts coded, and are, unbeknownst to all but their highest ranks, the main agents of Xehanort's own plans to conquer Kingdom Hearts.

Because all of the members are Nobodies they lack their original hearts, and it is initially claimed in Kingdom Hearts II that this means they cannot have emotions, instead relying on acting to unnerve and toy with their opponents. The Organization yearns to discover the secrets of the heart and become full beings again by gathering hearts to form Kingdom Hearts. Despite this, most of the members begin demonstrating true emotions as time goes on, and it is eventually revealed that while they lacked their original hearts, Xemnas's plan revolved around filling the hole with replicas of his own heart, essentially turning each of them into copies of himself. Despite lacking normal emotions, or perhaps because of it, many members of the group are remarkably disloyal to its head, and much of their story revolves around key betrayals or attempted coups. 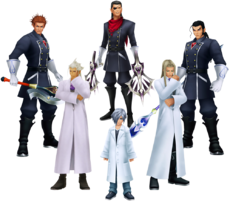 The six founders of Organization XIII.

Ten years ago, the founding members of the Organization live in Radiant Garden as humans. Ventus encounters Dilan, Even, Aeleus, and Ienzo, who work in Ansem the Wise's castle, as his guards and apprentices. He also meets Isa and Lea, two youths who have an interest in the castle.

Braig serves as a co-conspirator in Master Xehanort's ruthless ambitions, acquiring his signature scars and eyepatch following a battle against Terra. He appears at the Keyblade Graveyard to assist Xehanort, occupying Aqua and Ventus's attention. By this time, Braig houses a piece of Xehanort's heart inside himself.

After Terra-Xehanort is taken in by Ansem the Wise, Braig works together with him, laying the foundations for Organization XIII.

Even and Ienzo moments before they turn into Vexen and Zexion.

Organization XIII was formed by a group of researchers working under Ansem the Wise, the ruler of Radiant Garden, within his castle of Hollow Bastion. The head of this group was Ansem's apprentice, Xehanort, with the others being Braig, Dilan, Even, Aeleus, and Ienzo. Ansem the Wise began initiating tests about the human heart, focusing mainly on Xehanort, with the hopes of recovering his lost memories. At the urging of Ienzo, he constructed a massive laboratory under the castle. However, Ansem the Wise soon ceased his experiments, for he feared that going too deep would have grave repercussions, also noting Xehanort's apparently-superhuman abilities.

However, his six apprentices, still seduced by the desire for knowledge, conducted their own dangerous experiments on countless subjects. Eventually, they discovered the beings called Heartless, those that are born from the darkness in a heart and seek others as well. Xehanort, having taken on Ansem's name and writing his findings under it, opened a door he discovered, breaking down the barriers between worlds and allowing travel between them. Isa and Lea became apprentices in order to rescue Subject X a girl they befriended and was one of the test subjects. When a king named Mickey arrived, the six men's desire for knowledge eventually caused Xehanort to abandon his body, becoming a Heartless (though he was unusual in that he had a human form and retained his memories), with the other seven soon following. Thus, the first six members of Organization XIII were born, and they banished Ansem to a Realm of Darkness with the seventh and eighth members joined afterwards.

Over the next nine years, the Organization increased its numbers from eight to twelve, with Demyx, Luxord, Marluxia and Larxene joining their ranks.

At some point, the Organization discovered Castle Oblivion, and decided to convert into a second base for the purpose of researching memories. Xemnas secretly had certain members look through the castle to find the Chamber of Waking.

Xemnas appears at Hollow Bastion to battle Sora, testing his abilities after just recruiting his newly created Nobody, Roxas.

The neophytes, Marluxia and Larxene, try to take control of the Organization by using Sora as their puppet by manipulating his memories with Naminé's magic. The senior members assigned to Castle Oblivion, Vexen, Lexaeus, and Zexion, try to counter his plot by exploiting the powerful darkness that lays within Riku's heart. However, each group ends up being slain by heroes they sought to control, leaving Axel as the only survivor of the castle.

Organization XIII slays many Heartless to finish their Kingdom Hearts, which consists of the hearts of people instead of worlds. Since Roxas and Xion are able to wield the Keyblade, they are used to achieve this goal. In the end, both leave the Organization, with Xion absorbed into Roxas, and Roxas captured by Riku.

Following the Organization's defeat the recompleted members split in two camps; some electing to return to their Nobody state as members of Xehanort's Real Organization XIII, while others choose to assist Sora in his endeavors against the new Organization.

Once discovered, a humanoid Nobody is inducted into the Organization when an existing member gives them their new name. These names are anagrams of the names of their original identities,[1] or "others", "Other"s [2] with the insertion of an "X" as both a symbol that they have rejected their old identities, and as a callback to the χ-blade.[3] The only exception to this is the pseudo-member Xion, whose name is based on an anagram of "No.i", her ID as one of the Replicas.

In the naming ritual, the name of the Nobody's "other" appears before them in translucent, iridescent light, then an "X" drops down and the letters re-arrange themselves until they form a new name.

After being renamed, each member is given a uniform and a rank from I to XIII. The rank is based on seniority, and although the leader of the Organization, Xemnas, is also the rank I member, the ranks are not true measures of authority within the Organization. For example, the rank IV Vexen, a founding member of the Organization, is subordinate to the rank XI Marluxia, while the rank VII Saïx acts as Xemnas's second-in-command, right before the rank II Xigbar. Their uniform, a Black Coat, was chosen because it was something once worn by Xehanort, Xemnas's primary original persona, to safeguard him from the darkness between worlds while not cutting him off from it.[4] It is plainly adorned with a silver zipper and seemingly decorative silver beaded pull strings for the hood that form a semi-circle in the middle. Each member wears their zippers at differing points. Underneath their coats, most of the members wear hakama-esque black pants and knee-high silver trimmed boots, with the exceptions of Roxas, who wears sneakers of the same color, and Larxene and Xion, who wear a more feminized version of the boots with heels. In addition to this, they all wear lengthy black gloves. The exact contours of the coats vary from person to person.

Once fully inducted, the new members are introduced to the other members at Where Nothing Gathers, the meeting chamber of the Organization deep within their home base of the Castle That Never Was. The room contains thirteen thrones, one for each member, whose height is adjustable, with Xemnas's throne being the highest.[5] To his left are the odd-number ranked members while to his right are the even-numbered. Starting from Xemnas, clockwise, the members are Xaldin, Lexaeus, Saïx, Demyx, Marluxia, and Roxas, then Larxene, Luxord, Axel, Zexion, Vexen and Xigbar.

The Organization is also represented within the Proof of Existence, a room within the castle's central tower that contains thirteen portals marked with images of each of the members' weapons. The portals lead to other rooms, presumably belonging to each member of the Organization, and the state of the portal is a mirror of its member's own state: when a member has been destroyed, their portal is rendered inactive or can even break.

Members of the Organization are assigned various missions in order to hasten the completion of Kingdom Hearts. As Xemnas's second-in-command, Saïx is tasked with giving assignments to the other members. As Roxas and Xion are the only two able to harvest hearts, the other members are given other duties, such as performing reconnaissance or trying to sow seeds of darkness in order to promote good conditions for harvesting hearts.

Each member is aware of their lack of emotions, and many of them pretend to have emotions. For example, Saïx battles in a seeming rage, while Larxene taunts her opponents by giggling and winking. The idea that the Nobodies lack emotions is expanded upon in the manga and novel series, which depict the members with true emotions, but explain that they are plagued by a feeling of uncertainty and emptiness due to not having hearts. The manga further displays this "plagued" feeling by showing the members engaging in tasks like jigsaw puzzles, cooking, and reading to try to fill their emptiness.

Aside from the rank and name given to them by the Organization, each member has a unique weapon, often with a Nobody-aesthetic, as well as a title and an elemental attribute. These titles specify the role of the member, and often reference their elemental attribute or weapons as well.

Xion, the nominal fourteenth member of the Organization, is the only one without a title. Her lack of full membership is due to her status as a Replica meant to absorb Sora's leaking memories through Roxas and eventually replace the both of them, becoming a puppet Keyblade wielder for the Organization.