"The outside world is a dangerous place. You must stay here, where you're safe. Do you understand, flower?"
—Mother Gothel to a child Rapunzel

Mother Gothel is a character from the Kingdom of Corona in Kingdom Hearts III. She is the adoptive mother of Rapunzel, although Rapunzel has been led by Gothel to believe that she is her biological mother. She originated from the Disney film Tangled.

Mother Gothel was an old crone who kidnapped Rapunzel as a baby upon discovering that her hair had the ability to heal. Gothel raised Rapunzel as her own daughter within a tower, hiding her from the rest of the world by warning her of its dangers, all to exploit her mystical hair to keep herself eternally young.

Mother Gothel deems the trio useless in locating Rapunzel as she walks away.

Upon finding that Rapunzel has disappeared from their tower, Mother Gothel discovers a wanted poster for Flynn Rider within a satchel containing Rapunzel's stolen tiara. She is approached by Marluxia, who offers to help her retrieve Rapunzel. As he approaches her, Mother Gothel's eyes glow pink.

While searching for Rapunzel in the forest, Mother Gothel encounters Sora, Donald, and Goofy walking around and remarking on Marluxia, whom they had just met. Gothel watches for a few moments before dismissing the conversation as unimportant, but doubles back when Sora calls out for Rapunzel and Flynn. Gothel presents herself and asks them if they know Rapunzel, informing them that she is her mother. Sora tells Mother Gothel that they accidentally lost Rapunzel, causing her to dismiss them as useless as she walks away to search by herself. Gothel eventually finds Rapunzel and gives her the tiara Flynn stole, plotting to split the two of them apart.[2]

Rapunzel tells Gothel that if she lets her heal Flynn with the powers of her hair, Rapunzel will do whatever Gothel asks, sacrificing her freedom for the rest of her life, which Gothel accepts. While talking with Flynn, he cuts off Rapunzel's hair, removing its healing properties. Gothel begins to rapidly age before Pascal trips her, which causes her to fall out the window and wither away until only her cape remains. Marluxia observes from a distance, determining that her lingering darkness now poses a threat to Rapunzel's pure light, and subsequently uses that darkness to create the Grim Guardianess Heartless, which Sora and his friends destroy.

Mother Gothel has curly black hair and gray eyes. She wears a shiny dark magenta dress with a black cape. After Flynn cuts Rapunzel's hair, Mother Gothel begins to age rapidly. In the last moments of her life, her face and hands are gaunt and wrinkled, and her curly hair is a silvery white.

"You want me to be the bad guy? Fine. Now I'm the bad guy."
—Gothel trying to excuse her future actions by blaming Rapunzel

Mother Gothel, to Rapunzel, appears to be a kind and loving mother. However, she is actually rather selfish, narcissistic and deceitful, having lied to Rapunzel about her past and stolen her away from her true family in order to keep the mystical powers of Rapunzel's hair all to herself. Her narcissism manifests itself in consistent psychological abuse towards Rapunzel: consistently telling her that the world is a dangerous place in order to keep her in, and even gaslighting her with the implication that a good, loving daughter would never leave the tower. Although Gothel tells Rapunzel that everything she has done is to protect Rapunzel, Gothel's methods are extreme and overbearing. Gothel also cruelly binds and gags Rapunzel when Rapunzel attempts to leave the tower to rescue Flynn. She later stabs Flynn in both an act of cruelty against him and Rapunzel.

"Oh, I just listened for the sound of complete and utter betrayal and followed that."
—Mother Gothel to Rapunzel about how she found her 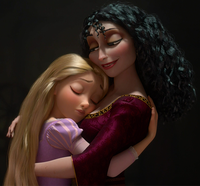 Mother Gothel first appeared as an antagonist in the 2010 Disney animated film Tangled in 2010, voiced by Donna Murphy. She is based on the witch Dame Gothel from the original Brothers Grimm fairy tale.

In Tangled, Gothel was an elderly woman who kidnapped the baby princess of Corona, Rapunzel, from her parents, in order to exploit the magical youthening ability of Rapunzel's hair. Gothel employed cruel psychological abuse and manipulation to keep Rapunzel dependent on her and afraid to leave her prison, but Rapunzel grew curious about the flotilla of lanterns put out by her parents' kingdom on her birthday, and manages to escape while Gothel is outside of the prison. Gothel tracks Rapunzel and her accomplice in escape, Flynn Rider, and very nearly manages to convince Rapunzel to return with her to save Flynn's life, but he surprises them by cutting Rapunzel's hair and destroying their magical power, causing Gothel to suddenly expire of old age.