"What does a whelp like you know about the heart?"
—Davy Jones, to Sora

Davy Jones is a cursed pirate introduced in Kingdom Hearts III, and originally taken from Disney's Pirates of the Caribbean: Dead Man's Chest.

Unable to bear the pain having a heart gave him, Davy Jones cut out his literal heart; for some reason, removing the organ also removed his metaphysical heart as well. He locked it away in a black box for safety: if anyone destroyed it, his curse would transfer to them and make them the new captain of the Flying Dutchman.

Davy Jones raises the Black Pearl from the depths for Jack Sparrow. In exchange for the pirate's soul, Jones allows Sparrow to captain the ship for thirteen years. Three years shortly afterwards, Hector Barbossa mutinied and stole the Pearl, causing Jack to believe his deal with Jones was on hold due to a technicality; since he wasn't captain of the Pearl for a decade of their world's time, it meant Jack didn't truly get his part of the bargain.

Furious that Jack Sparrow did not honor their agreement, Jones sends the Kraken to dispose of him. Jones soon finds himself under Cutler Beckett's command when his heart comes into the man's possession.

On a small island, Beckett has Jones and William Turner by his side. The three of them meet with Jack, Elizabeth Swann, and Hector Barbossa. Jones still does not consider Jack's debt to be paid and tries to force Jack to become his slave for a hundred years on the Dutchman. Elizabeth persuades them to exchange Will's slavery for Jack's.

Jones aids Cutler Beckett in a final attempt to destroy Jack and the Black Pearl. While aboard the Flying Dutchman, he spots Jack attempting to escape with the chest at hand. Jones tries to seize the chest, but is pitted against Jack, along with Sora, Donald Duck, and Goofy. Eventually, Jones solely engages Jack in an intense sword fight atop the mast of the Dutchman, with Jones breaking Jack's sword. On the deck, Jones continues his duel with Jack, knocking him to the ground and attempts to reclaim the chest, only being stopped by Elizabeth.

Overpowering Elizabeth, Jones prepares to kill her before being impaled through the back by Will. Undaunted, Jones kicks him aside and looks both him and Elizabeth, realizing their relationship. Jones mocks them, stating how dreadful and fragile love is, though Sora rebuffs him, saying that love forms a strong bond that not even he can break. Jones scoffs at him before holding Will at sword-point, asking if he fears death. He is then interrupted by Jack as he holds the open chest to his heart and a broken sword in the other hand, taunting him in a desperate bid to save Will.

Before Jack can stab the heart, Jones mortally wounds Will's chest, leaving Jack visibly shocked and Elizabeth distraught. Enraged, Sora, Donald, and Goofy jump on Jones and briefly overpower him, but he quickly shakes them off. As he prepares to kill the boy, Jack helps Will plunge his sword into Jones' heart. Seeing his heart stabbed, Jones staggers before he looks up into the sky then tumbles backwards off the ship, falling into the maelstrom. With his death, Will takes his place as captain of the Flying Dutchman.

Davy Jones is a cursed pirate whose human visage was replaced with that of an octopus. With a beard of tentacles and a large hat upon his head, Jones has had two of his limbs replaced with those of a crab, and he is covered in barnacles.

A self-proclaimed "heartless wretch," Davy Jones sees love as a dreadful bond easily severed. He is also unempathetic towards those who do not hold up their end in deals, such as trying to make Jack become his slave for a hundred years. 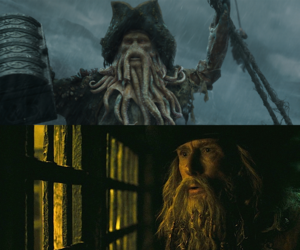 "Do you fear death? Do you fear that dark abyss? All your deeds laid bare, all your sins punished? I can offer you an escape."
—Davy Jones

Davy Jones is the main antagonist of Disney's 2006 film, Pirates of the Caribbean: Dead Man's Chest. Portrayed by Bill Nighy, he relentlessly pursues Jack Sparrow in an attempt to settle the pirate's debt to him. Using the Kraken, Jones successfully disposes of Jack, but the cursed pirate soon finds himself under Cutler Beckett's command when the man obtains his heart.

A secondary antagonist in 2007's Pirates of the Caribbean: At World's End, Davy Jones begrudgingly helps Cutler Beckett in his attempt to exterminate all pirates. The protagonists' efforts to stop Beckett and his forces reveal Jones to be the former lover of the sea goddess Calypso, whom he betrayed for breaking his heart. Davy Jones is eventually killed by William Turner with help from Jack Sparrow and Elizabeth Swann in the film's final act.

In 2017's Pirates of the Caribbean: Dead Men Tell No Tales, Davy Jones is resurrected following the Trident of Poseidon's destruction.