The Command Board (コマンドボード, Komando Bōdo?) is the board game level-up system in Kingdom Hearts Birth by Sleep. It can be used to power up the player's Deck Commands by obtaining Command Panels and leveling them up. Players toss the dice and move toward the goal, gaining Goal Points (GP) along the way. The player also will have the chance to steal GP from their rivals and use certain panels and Command Cards to their advantage. Players have the option on their turn to roll the dice, use at least one Command Card as part of a Hand, check the status of the game or choose different options to adjust gameplay and help.

After rolling the dice, players can go any direction on the board except from the direction they just came from. There is no specific route to take in order to win the game. There is a certain number of total GP that a player must have before winning the game. Returning to the starting point with the required number of total GP finishes the game. The winner will receive medals to be used in the Moogle Shop if the Command Board session is played as an Event in the Mirage Arena. Regardless of victory, the player's commands will still be leveled up and any new commands purchased from Bonus Panels or opponents will be received. 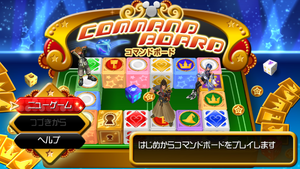 The Command Board main menu. 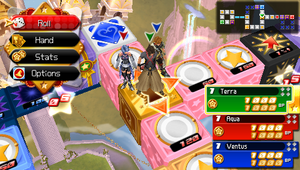 Terra, Aqua and Ventus on Land of Departure's Command Board.

Each Command Board is based on a world and has a different panel formation to represent that world. The boards are unlocked after completing the story of the worlds they are based on, except the Honeypot Board (unlocked by examining the Winnie the Pooh book in Merlin's house) and the Secret Board (unlocked by winning a game on each of the other boards).

The Command Board maps.

Picking the order of turns

The player plays as Terra, Aqua, or Ventus based upon the current storyline.

Players play against certain Disney characters based on the world the board is based upon. Players can can choose from a set order of who will go first, or roll a die with the other characters to see what the order will be. Playing Command Board normally from Save Points pits players against all characters appearing on a certain board (e.g. playing against both Queen Minnie and Pete on the Toon Board), while playing in the Mirage Arena allows players to choose to play against one or two opponents.

The characters appearing in each world are as follows:

The GP Counter is in the bottom right corner and keeps track of all the character's current and total GP. The above number is the player's current GP, which doubles as currency and can be used to buy panels or pay other character's panels when stopping on them. The bottom number is the total GP which is the sum of the current GP and the points spent on the player's panels. The GP Counter also shows which character is which color and how many of the Checkpoints the characters have passed through.

Command Cards are cards that represent Deck Commands that the player owns. These cards can either be placed on purchased Command Panels, or used once per turn for a Hand. Each player is dealt up to their hand size of five at the start of the game. They are dealt one Command Card each time they pass a new Checkpoint, and their hand is refilled once they return to the Start Panel after passing all four Checkpoints. The dealer gives preference to Commands not yet mastered, but if the unmastered Commands are used up, it will begin drawing from those that have been mastered.

There are many different kinds of panels that are on the game board that each have their own purpose.

The start panel is a yellow panel with a Keyhole on it. Returning to this panel after acquiring the goal number of GP ends the game, while passing over this panel after reaching all four Checkpoints rewards GP from Lap Bonus, Panel Bonus and Card Bonus.

There are four Checkpoints throughout the board, blue, red, green, and yellow. Passing through all four panels is optional, but doing so before landing on the start panel nets extra GP.

Landing on a white command panel will allow players to purchase it, paying a certain amount of GP and selecting a Command Card. Purchasing a command panel colors it based on the player's color, and it shows what level the command is at. If someone stops on a purchased command panel, it takes GP from their current GP and their total GP. The number on the panel is the amount of GP a player has to pay. Players can also steal the panel from the person for a large amount of GP.

Players who stop on their own Command Panel can spend their current GP to level them up until the command is mastered. They can also level them up by landing on a Checkpoint or the Start Panel and selecting a Command Panel of choice. Leveling up Command Panels increases the GP deposited by other players. The amount of how much GP obtained in the game is decided by various things like the position and value of the panel. Purchasing an opponent's Command Panel will allow the player to obtain that command at the end of the game, unless it is a command the player character is unable to equip.

From the beginning of the game, some Command Panels are set as Bonus Panels and are represented by a gold star. Landing on the Bonus Panel allows the player to receive a new Deck Command without using a Command Card while still having to pay for it.

Each board has its own set of bonus panels, some of which feature "limited" rewards, such as Shotlocks, and are replaced by different rewards for subsequent games once it has been obtained. In the Mirage Arena, the vast majority of bonus panels for each board are absent.

The Prize Cube panel that is used to navigate the damage panels.

Damage Panels are board spaces that are flat squares instead of cubes. Landing on one of these detracts the current and total GP that is displayed on the panel. There is one way to avoid these panels and that is a panel that looks like a present called the Prize Cube and can be rolled around to travel over the damage panels safely. The GP that has been taken from the damage panels will be given to the Prize Cube.

However, there is a limit to how many panels the Prize Cube can go and once the counter reaches zero, the panel disappears and rewards the GP inside and all the GP taken from players on the damage panels. Players can also hijack the Prize Cube while someone else is on it and they will fall onto the damage panel and lose GP.

Special Panels are gold and purple in coloration. Landing on them will trigger a unique event based on the current board that may help or hinder the user.

The GP Booster Panel is a black panel that increases the rate of GP received when opponents land on a player's panel, when players land on the checkpoint and starting panels and if a player successfully uses the Prize Cube on the damage panels.

Command Board play in the Mirage Arena.

Like regular battle has Joint Struggle multiplayer gameplay with the Mirage Arena world, the Command Board game has its own wireless multiplayer gameplay option that allows players to play on all the different world game boards. Terra, Aqua, and Ventus appear in their Keyblade Armor. The rules are the same as the single player Command Board and players can still gain GP to level up Deck Commands.