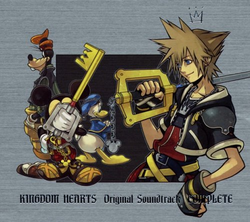 Kingdom Hearts Original Soundtrack Complete is a video game compilation album that contains music from all the games in the Kingdom Hearts series prior to its release. It is a total of nine discs and 229 tracks including previously unreleased tracks.

It was released in Japan on March 28, 2007 by Toshiba-EMI. It has yet to be released in North America and Europe. It was recorded at the Tokyo Opera City Concert Hall.

The package and a deluxe booklet was designed by the series' director and character designer Tetsuya Nomura with new illustrations and comments from Yoko Shimomura. It also came with a special CD carrying case that features Sora and Roxas.