"Fakes should be destroyed!!"
—Riku Replica to Sora

The Riku Replica is a replica of Riku created from the data Vexen had gathered. He appeared in Kingdom Hearts Chain of Memories and acts as one of the main antagonists of the game. Though he almost always appears in Dark Mode, the only time when he did not have this suit on is his debut in either storyline. Originally a subject to test the real Riku, the Replica was later exploited to become a puppet of Marluxia who attempted to use him to manipulate Sora and overthrow Organization XIII. As Dark Riku, he serves as a member of the real Organization XIII.

Vexen presents the Riku Replica to Zexion and Lexaeus.

The Riku Replica was created by Vexen in order to test Riku's strength, and hopefully cause Riku's heart to return to the darkness. At first, Riku was shocked to see his counterpart; however, after the original heard the Riku Replica's taunts, a battle began. Due to the short time of Riku Replica's existence, he lacked experience and was quickly defeated by the original. Riku then attempted to destroy the replica, but failed when the Riku Replica utilized the power of darkness.

Riku Replica escapes, and eventually ends up in Organization XIII's chambers, where Larxene taunted Riku Replica over his loss. However, the replica denied any fault of this, saying that his powers had not grown enough, which resulted in her bashing him into the wall calling him "nothing but a mere toy". The Organization members later change their plans, hoping to turn Sora into their puppet and overthrow the Organization. Larxene suggested that Riku Replica's memories should be rewritten to be the same as the original's so he would become a much stronger and more useful tool. Riku Replica, upon hearing Larxene's idea, rejected it, saying that he did not need his original's pitiful memories, but all the members began to agree upon Larxene's plan. Fearing that he would lose his memory, Riku Replica assaulted Larxene. However, he was quickly knocked out and Naminé was ordered to rewrite the replica's memory.

After having his memory rewritten, Riku Replica swore to protect Naminé, and saw Sora as a threat, feeling already betrayed by him as he thought Sora didn't care for him and cared only for Kairi. At some point during the period in which he believed himself to be the true Riku, the Replica was retrieved by Young Xehanort and implanted with a fragment of Xehanort's heart, inducting him into the real Organization XIII as "Dark Riku".[?] Once Dark Riku was defeated in the future, his heart returned to its proper place in time.[?]

Sora's first encounter with the replica confused the Keyblade Master, as he believed that the replica was the real Riku. Sora managed to defeat the replica, who then escaped. Riku Replica later encountered Sora in Castle Oblivion's 8th floor, where he urged Sora to leave, as he would protect Naminé. Hoping to regain his friend, Sora offered to jog Riku Replica's memory, but nothing worked, and a fight ensued.

Riku Replica, defeated, felt even more anger when Sora offered his help so they could protect Naminé together. Hearing Sora say "together", Riku Replica is filled with sadness and rage and he screams his true feelings at Sora, telling him that he was always trying to worm his way into his heart and that it never mattered to him how he felt. After that, Riku Replica runs away, leaving Sora behind, confused.

Riku Replica's third encounter with Sora happens on the 11th floor, after his creator's demise, where he means to force Sora to leave. Sora, who has defeated Vexen, tells his friend that he is free, but the Riku Replica claimed that he was protecting Naminé from him, of his own free will. Riku Replica then tells Sora of the very same promise Sora made to Naminé when they were young. Sora claims that he was the one who made the promise and shows Riku Replica the lucky charm Naminé gave him as proof. In a rage, Riku Replica lashes out at Sora, and tells him that the Keyblade master's lucky charm was a fake, and the lucky charm he holds is the real thing. Sora and the replica fought, but the Riku Replica was once again defeated, and ran away.

Riku Replica's false memories come to an end on the 12th floor of Castle Oblivion. Meeting again with Sora, he insisted that he was the one destined to protect Naminé, but Sora's wrecked memories kept interfering. Sora defeated the replica again, however, and when Sora went to help him, the Replica retaliated, knocking Sora back.

Just as Riku Replica was about to deliver the coup de grâce, a desperate Naminé shatters Riku Replica's false memories and his heart with them. Larxene later interferes, and explains Riku Replica's nature and creation. An angered Sora fought with the Organization member, successfully defeating her. Riku Replica was last seen in the top floor of Castle Oblivion, where he saved Naminé from Marluxia. Despite losing his memory, he remembered his oath to protect Naminé. He protected her throughout the battle between Sora and Marluxia. In the end, he leaves Sora and Naminé, saying a fake like him does not deserve to be together with them; Sora, however, comforts the replica. Feeling Sora's warm kindness, the replica smiles and leaves. He still has one more thing to do: defeat the real Riku.

In the memory-based Twilight Town, Riku Replica fights Riku in hopes of becoming more than his "shadow".

After leaving Sora, Riku Replica joined Axel, who would use him for enacting his (and Saïx's) own plans. They seek out the wounded Zexion, who is initially shocked to see them, believing Axel to be accompanied by "the real Riku". His relief does not last long, however, after Axel presents the replica with an idea, telling that if he gains power that the real Riku doesn't have, he could be something real, not someone's counterpart. Agreeing, Riku Replica approaches Zexion, and drains the life force out of him (initially giving him Zexion's powers). Riku Replica was later seen in a memory version of Twilight Town, where he meets Riku in front of the Old Mansion. The replica remarks that Riku no longer feared the darkness, in which he earns the original's confusion in return. Riku Replica replies that he is Riku, and thus he would know everything about his counterpart. Feeling annoyed, Riku remarks that he is himself, and no one could possibly be him. Angered because of the fact that he is "a fake", the Riku Replica taps his dark powers, and states that in the end, he was still nothing but a replica, even after gaining new power.

Blinded by jealousy and rage, Riku Replica engaged the original, and the two had a fierce battle. In the end, despite Riku Replica's new found powers, he was defeated, and slowly faded back into the Darkness. With his dying breath, he asks Riku where a replica's heart like his would go. Riku comforts the replica, stating that it would go to the same place as his. The replica smiles, and remarks "A faithful replica until the very end. That's... okay," before fading back into the darkness.

Riku Replica is mentioned once when Xion is revealed as a replica and is also mentioned in the Replica Program as "a numberless replica". Axel mentions Riku Replica in his own Secret Reports, stating that he is the only one who understands that Riku Replica gained a sense of self. He also expresses regret at having used the replica as a tool.

Naminé illustrated Sora's memories of the Riku Replica in one of her drawings in the White Room.

Upon encountering Dark Riku, Riku notes his resemblance to the Riku Replica.

Having been wandering the Dark World as a disembodied heart, Riku Replica nearly allowed himself to vanish. However, he caught sight of the real Riku in trouble and freed him from the Demon Tower. In gratitude, Riku leaves his broken Way to the Dawn behind for the replica. Upon Riku's return, Riku Replica offers the repaired Keyblade to fight Anti-Aqua, only to learn that Riku got a replacement in Braveheart.

Temporarily merging hearts with Riku to leave the Dark World, Riku Replica reveals since his defeat at Castle Oblvion, he's been holding on to existence to take care of unfinished business.

Riku Replica removes Dark Riku from the vessel he is using, leaving it behind for Naminé to use.

Once Dark Riku is defeated, Riku Replica expels his past self's heart from the vessel. Despite Riku's protests, the replica leaves Dark Riku's vessel for Naminé to take and fades away, fulfilling his promise to protect her. 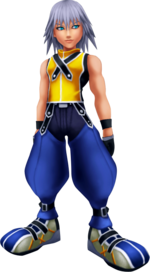 The Riku Replica is physically identical to Riku as he appears in Kingdom Hearts, sporting the same skin tone, bright blue eyes, and shoulder-length silver hair. He initially appears in Riku's standard outfit, but quickly shifts into his Dark Mode form, and remains in the latter outfit for the remainder of his appearance.

The Replica was more aggressive and protective than Riku, which is exactly what Ansem, Seeker of Darkness was looking for. A key difference between the two is that while Riku fears the darkness in his heart, the replica embraces his and wields it effectively. He was also more stubborn, which made him more of an enemy in the game. Another factor is how he searched for his existence nonstop. He seems to (like Sora) get very angry when he's confused, as shown when the Organization members such as Larxene try to trick him. At the end of his life, the replica became much more like the original, becoming sullen and mellow. He often lashed out at anyone who talked back to him, even if they overpowered him. He seemed to be as powerful as Riku was at Hollow Bastion, when Riku was under Ansem's possession.

The replica clearly seemed to possess true emotions, as he seemed to harbor a close friendship or even outright affection for Naminé, though his belief in it was merely part of the illusion Naminé had created by tampering with Sora's memories while at Castle Oblivion.

The Riku Replica fights with the same style as the real Riku, but is generally more aggressive and leaves himself wide open during his battles. His sleights take less power than Riku's, only needing any three cards provided they are the right type to perform Dark Aura in contrast to the three 9's that Riku needs. He also uses Helm Split instead of Riku's Dark Break.

The Riku Replica primarily wields Soul Eater. In Kingdom Hearts III, he acquires Riku's Way to the Dawn Keyblade, which Riku leaves behind in the Realm of Darkness when it is snapped in half.