From the Kingdom Hearts Wiki: A world of information not accessible by Gummiship
(Redirected from Captain Barbossa)
Jump to navigationJump to search

"We are cursed men, Miss Turner."
—Barbossa to Elizabeth

He is an antagonist during the first visit to Port Royal. He wants to break free from the curse of the medallions and will do everything needed to reach that goal. To this end, he makes an alliance with Pete for use of the Heartless, learning that there is magic not from his world that can harm him and his crew in their skeleton forms.

Barbossa was originally the Black Pearl's first mate under Captain Jack Sparrow. Barbossa persuaded Sparrow to reveal the bearings leading towards the Isla de Muerta to him and the rest of the crew. Sparrow divulged its location, but that night, Barbossa led a mutiny and commandeered the Black Pearl, leaving Sparrow marooned on a tiny island, with only a single-shot pistol with which to end his life. The newly captained Barbossa and the crew stole the cursed Aztec treasure, which bestowed each member of the crew with the same curse. The crew had become Undead Pirates, unable to enjoy the pleasurable things in life and trapped between life and death. To lift the curse, the crew must return all the Aztec gold to the chest on Isla de Muerta and offer the blood of all who had touched the treasure. The pirates also needed the blood of their former shipmate, "Bootstrap Bill" Turner, the only one to hold out against the mutiny and then sent his medallion away to his son before being tied to a cannon and thrown overboard.

For a decade, Barbossa searched for the last coin until he detected the coin's "signal" from Port Royal. Pete visited the world at the time the Black Pearl came to plunder and loot Port Royal, extending his hand in aid to Barbossa. The pirates kidnapped Elizabeth Swann, thinking she was the daughter of Bootstrap and gaining the Aztec medallion she possessed. Barbossa reveals their cursed state to Elizabeth, as well as the blood payment, with a child of Bootstrap's being a substitute. Upon arrival to Isla de Muerta, Barbossa performs a ritual offering a small amount of Elizabeth's blood to break the curse. However, nothing happens. In his anger, he fails to notice Will Turner taking away Elizabeth. Jack Sparrow is left behind in the cave, and he is taken prisoner aboard the Black Pearl as it catches up with the Interceptor. After a lengthy battle for the medallion, Sora and the ship's passengers are taken captive. Will comes to the rescue, threatening to take his life using his gun if his friends are not released. His noble act fails as Pete knocks him out cold and the rest are tied up in the Interceptor's cabin, with explosives scattered around the deck.

After Barbossa stabbed Jack, Jack walks into the moonlight.

Back at Isla de Muerta, Barbossa performs the ceremony with Will, but as he is about to spill his blood, Sora, Jack, and friends arrive at the scene. While Sora and company deal with the crew, Jack duels Barbossa until Jack is stabbed. However, Barbossa is stunned to find that Jack was under the curse as well, secretly taking an Aztec coin from the chest. Barbossa calls for Pete's help, which is granted in the form of the Illuminator Heartless, who absorbs the moonlight, making Barbossa immune to the Keyblade. Sora and Jack destroy the Illuminator and defeat Barbossa while he lurks in the moonlight.

Jack cuts his palm while Barbossa is recovering from his defeat, throwing the bloodied medallion to Will who bleeds on his own medallion. Jack then shoots Barbossa with the same pistol Barbossa marooned him with ten years before. Barbossa laughs until Will drops the two bloodied final coins into the chest, lifting the curse. With that, Barbossa is overcome with the pain of death, saying he feels cold as he collapses.

At some point in time, Barbossa was brought back to life by Tia Dalma and allied with Tia, Will, Elizabeth, Joshamee Gibbs and the remainder of the crew of the Black Pearl to rescue it and Jack from Davy Jones' Locker.

Arriving on the shores of the otherworldly dimension, Barbossa watched in amazement as the Black Pearl arrived over a sand-dune with not only Jack on board, but Sora, Donald, and Goofy as well thanks to Tia's magic. Barbossa had an awkward reunion with Jack in more than one way, as Jack claimed to not remember shooting him in their last encounter and believed the group was simply a hallucination. Barbossa forced Jack to take him, Will, and Elizabeth along despite his dislike of them as the map he carried was their only way to escape the Locker.

After returning to the living world, the Black Pearl is soon attacked by the Heartless. While Jack is quick to accuse Barbossa of aligning with them as he did in the past, he denies any involvement with them. After the defeat of the Heartless invasion, Barbossa became separated from the group, although he managed to locate Jack and Elizabeth.

On a small island, the three meet with Cutler Beckett, Davy Jones, and Will. Barbossa tries to defend Jack from being Davy Jones' slave, although Elizabeth manages to exchange Will's slavery for Jack's.

Later, Barbossa completes the ritual to release the sea goddess Calypso from her human vessel, Tia Dalma, in an attempt to procure her assistance, but due to her mercurial temperament she instead creates a maelstrom. When Sora, Donald, and Goofy reunite with the group, Barbossa informs them of what happened and feels their situation is hopeless. However, with Elizabeth's inspiring speech, Barbossa joins the others in the final battle against Davy Jones and the Flying Dutchmen. After Davy Jones' heart is stabbed, Barbossa, now at the helm, steers the Black Pearl out from the maelstrom, with Sora, Jack, and the others barely escaping the Dutchmen.

With the Endeavour approaching and Beckett prepared to attack the Black Pearl, Jack orders the crew to prepare for attack. The Dutchman soon resurfaces with Will at the helm, as the new captain of the Flying Dutchman. Both the Pearl and the Dutchman bombard the Endeavour, destroying it, along with Beckett on board. With Will now bound aboard the Dutchman, Elizabeth bids Sora, Jack, Barbossa, and the crew farewell before leaving to have one day with Will.

Sometime after Xehanort's defeat, Jack and Gibbs watch as Barbossa sails away with the Black Pearl once again, leaving a dinghy in its place.

Barbossa is a large man with shoulder-length blonde hair, blue eyes, and a thick, wiry beard. He always wears an extravagant tattered black hat with a large black feather sticking out of it. Like Jack, Barbossa wields both a sword and pistol in battle, though he uses a basket-handled rapier as opposed to Jack's cutlass. A small medallion is visible hanging from his neck, and over his right shoulder he wears a brown belt decorated with many silver ornaments which holds the holster for his pistol at his left hip. He wears a black coat with dozens of buttons lining the front and cuffs over another, buttoned up coat that is comparatively more colorful, patterned in splotched orange and brown and lined with light yellow. Underneath this second coat is a faded white shirt, the collar of which is folded over the collars of both coats. Barbossa also wears a gold sash under a black belt, dark pants, tan boots, and a brown, fingerless glove on his left hand.

Under the influence of the curse, Barbossa becomes a decayed skeleton. Where his skin remains, it has become grey and rotten, as does his hair and beard. The ornaments on his brown belt become rusted along with the chain of his medallion and his eyes turn grey. A single gold tooth is visible on the front left side of his upper jaw, due to his lips decaying away. His clothes also decay away, and he loses most of his shirt and undercoat, and his entire glove. What clothing remains becomes considerably more tattered than it was before, save for his black belt, which is unchanged.

Barbossa is a ruthless pirate who has no regard for anyone's life, save for his own, as well as the lives of his crewmates. He will do anything to be freed from the curse, as seen in the lengths he goes to capture Elizabeth and Will, killing anyone who stands in his way. Barbossa is not foolish either, never underestimating Sora or Jack and sending constant streams of Heartless and Undead Pirates to keep them occupied.

Barbossa does have a sense of honor, as he immediately denied having allied with the Heartless again when they attacked the Black Pearl upon their escape from the Locker.[citation needed] He does not tolerate betrayal from his allies, immediately taking Jack's piece of eight when Cutler Beckett revealed their deal during Parley.[citation needed] Despite all this, Barbossa is a trickster, willing to steal the Black Pearl from Jack again. 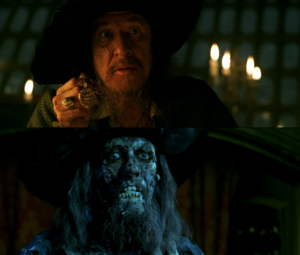 Hector Barbossa originally appeared as the main antagonist in the 2003 film Pirates of the Caribbean: The Curse of the Black Pearl, played by Geoffrey Rush.

This section of the article is a stub. You can help by expanding it.
Retrieved from "https://www.khwiki.com/index.php?title=Hector_Barbossa&oldid=824217"
Categories:
Meta categories: