"You have a little item called the Keyblade. It can open any lock, isn't that right? Hand it over, and I'll change Rinzler back into Tron."
—CLU to Sora

CLU is an antagonist from The Grid who appeared in Kingdom Hearts 3D: Dream Drop Distance. He was a program originally created by Kevin Flynn to help oversee The Grid, but having been programmed to create the "perfect system", he betrayed him and took The Grid under his control, while also issuing the complete annihilation of the ISOs. He originated from the Disney film, Tron: Legacy.

Upon Rinzler's return to the Throneship, CLU is given the masked program's Identity Disk, which displays both Sora and his Keyblade; amongst the images is Sora opening a treasure chest with it. Seemingly pleased, CLU returns the disk to Rinzler as he looks out towards the city.

After an encounter with Xemnas and Young Xehanort, Sora finds himself in the Disc Wars arena. As he studies his surroundings, CLU appears before him with Rinzler at his side. CLU confirms that he was the one who turned Tron into Rinzler in the first place, but he agrees to turn him back in return for the Keyblade. When Sora refuses to comply, CLU states that he'll have to take the Keyblade from him by force. Rinzler attacks Sora, and the two battle.

After their skirmish, Sora manages to restore Tron from within his agile opponent. CLU throws his identity disk at Sora in an attempt to eliminate him, but Rinzler knocks Sora out of the way and is hit by the disk instead. The disk then ricochets off the walls of the arena and hits the floor directly in front of Rinzler, creating a massive hole underneath him. As the program falls, he desperately reaches for Sora's hand. After watching these events transpire, CLU determines that he'll have to deal with Sora later and heads off to retrieve his masked lackey.

"I took the System to its maximum potential. And now, you see the applications at my disposal!"
—CLU summons the Commantis

After he is apprehended by a group of Black Guards, Riku finds himself on the Light Cycle track. CLU appears behind him with a pair of guards, and he explains to the young Keyblade wielder that it's a truly rare honor to participate in a Light Cycle battle. When Riku questions why it's so special, CLU has some of his guards drive by to demonstrate the purpose of the "game".

When Riku accompanies Kevin Flynn, his son Sam, and Quorra to the Portal, he finds CLU waiting for them. CLU accuses Flynn of breaking his promise that the two of them would change the world together, and he summons the Commantis to demonstrate the applications at his disposal from bringing the system to its maximum potential. Riku battles and defeats the Nightmare Dream Eater, after which CLU tells Flynn he has created the perfect system. Flynn corrects CLU and tells him he has no knowledge of what perfection truly is because he did not know what it was when he created him. He apologizes to his creation only to be kicked violently and knocked to the ground, and Sam attacks CLU to avenge his father. The program effortlessly tosses him aside, and Riku and Quorra come to Sam's aid.

Hoping to save his son, Flynn tells CLU to remember what he came for: his identity disk, the key that would allow him to escape the Grid and enter the real world. CLU closes in on Flynn and takes the disk, but when he examines it and sees that it is truly Quorra's, the antagonistic program desperately tries to reclaim Flynn's by leaping to the other side of the bridge. Sam and Quorra reluctantly leave Flynn behind on his orders and open the Portal to escape the Grid, and Riku blocks the path to the Portal so that CLU cannot follow them. Flynn then sacrifices himself to eliminate CLU, forcing the program back into his being.

Due to his programming, CLU's main goal is to create perfection, and he is willing to eliminate anyone he considers an imperfection; Flynn would admit that this flaw was his fault as he did not understand the true meaning of perfection at the time of CLU's creation, thus leaving CLU with an incorrect belief. He has no reluctance to employ cruelty in his quest, like when he forces Sora to choose between saving his Keyblade or Tron, or when he sends the Commantis to eliminate Riku. 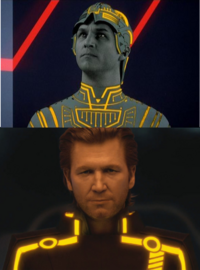 CLU 2, short for "Codified Likeness Utility", first appeared as the main antagonist of the 2010 Disney film Tron: Legacy. He is a recreation of the original CLU, who makes a brief appearance in the 1982 film Tron. Played by Jeff Bridges, CLU is sent by Kevin Flynn into the ENCOM server in order to retrieve evidence of Ed Dilinger's plagiarism of his work. However, CLU is caught by a Recognizer and is subsequently derezzed by the Master Control Program.

After becoming the CEO of ENCOM, Flynn recreates CLU in order to oversee the Grid in his place with help from Tron. At one point, a new race of programs, the ISOs, emerges from the Sea of Simulation; Flynn sees these as the next step in human evolution, but CLU 2, having been programmed by Flynn to build the "perfect world", sees the ISOs as an imperfection, and due to their differing opinions, performs a coup d'etat. In the ensuing scuffle, CLU 2 fights against Tron while Flynn escapes. CLU 2 gains the upper hand and defeats Tron, but rather than kill him, he repurposes him to serve him as Rinzler. CLU 2 then oversees the "Purge", a genocide of the ISOs, and he brings the Grid under his control.

Over the next twenty years, CLU 2 discovers that Flynn's identity disk, the Grid's master key, will lead him to the real world, which he hopes to take over and make a part of his "perfect world". To this end, he sends a page to Flynn's son, Sam, in order to lure him into the Grid, but Sam escapes with help from the last remaining ISO, Quorra. Eventually, CLU 2 tracks them to Flynn's hideout and gains possession of Flynn's disk with help from a double-agent, Zuse. However, as CLU 2 prepares to lead his army into the real world, he is stopped by Kevin, Sam, and Quorra, who aim to reach the I/O tower and escape while leaving CLU 2 trapped inside forever. During the resulting chases and fights, Rinzler remembers his past as Tron and almost kills CLU 2, but CLU 2 survives and pursues the Flynns and Quorra to the I/O tower. During the final confrontation, Flynn sacrifices himself to reintegrate CLU 2 into his being while Sam and Quorra escape, destroying CLU 2 once and for all.

In Tron: Legacy, CLU 2 is physically portrayed by John Reardon. Jeff Bridges provides CLU 2's facial capture and voice, digitally de-aged through CGI using his likeness from the 1984 film Against All Odds.