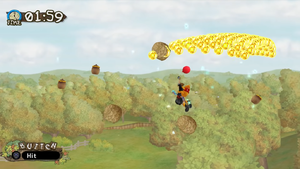 A Blustery Rescue (プーのおおあらし, Pū no Oo-arashi?, lit. "Pooh's Storm") is a mini-game that appears in Kingdom Hearts II. It is played by obtaining the first Torn Page. When you play it for the first time, you only need to rescue Piglet. Sora can later re-play the mini-game by talking to Piglet.

In A Blustery Rescue, you need to collect as many points as you can by breaking flying pots, rocks, and huge tree stumps.

A small and huge whirlwinds can be seen on the mini-game, you can get close to it and press

to suck in and break all nearby materials. Be careful not to get hit as Pooh will fly away and you have to get him by pressing

, otherwise you won't be able to pick up any points at all. The maximum amount of points obtainable in this mini-game is 20.000 points.

This is a fairly easy mini-game to complete, since it is possible to just repeatedly press the

button, preventing Pooh from being harmed. It is best to use long Keyblades, such as Sleeping Lion, Ultima Weapon, or Fenrir. Whenever possible, focus on striking hunny pots and large tree stumps, as they give the most points, and avoid rocks, which give the least amount of points. As stated above, there are several tornadoes that can be used to immediately gather and break all of the objects on the screen by the use of a reaction command. Be sure to time it so the most objects are on-screen to maximize the points you receive. The requirement for Jiminy's Journal is rather high. You will have to destroy almost every single object to fulfill the requirement.