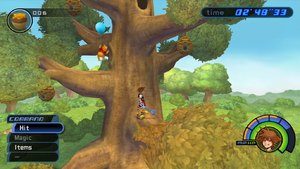 After Sora receives the first Torn Page, the Hunny Tree area is opened up. When you enter, you meet a frightened Piglet who tries to run away from Sora. Pooh then introduces Sora and Piglet. The mini-game in this area is Pooh's Hunny Hunt.

The point of the game is similar to the movie "Winnie the Pooh and the Hunny Tree". The objective is to guard Pooh from the bees as he flies up holding his balloon and collecting hunny. The game ends when you run out of time, and it is completed when Pooh reaches the top of the Hunny Tree.

In order to obtain Cheer, one of the objectives is to complete the mini-game with at least 100 licks.