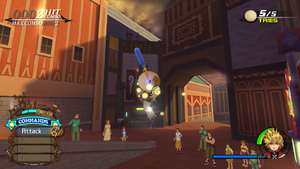 Grandstander (パフォーマンス, Pafōmansu?, lit. "Performance") is a mini-game which can be played as Roxas or Sora in Kingdom Hearts II, and by Roxas again in Kingdom Hearts 358/2 Days. Similar to the Rare Truffle and Mushroom #8, the point of the game is to keep the ball in the air by attacking it for as long as possible.

The ball one must strike in the Grandstander mini-game.

To unlock the secret ending, Jiminy's Journal must be completed. Part of finishing Twilight Town's entry involves playing this mini-game. The Jiminy Objective is to complete it with 100 or more points.

If this mini-game is completed with a certain number of juggles, Roxas will earn various amounts of munny.

Each hit knocks the balloon up slightly and each combo finisher sends it flying. Lock on and try to hit the balloon toward a corner. If Sora swings too early, he will likely lose his combo.

Long Keyblades are recommended for this task, as they increase Sora's range and minimize the chances of missing. "Combo Plus" abilities are useful, while finisher abilities are not recommended as a lengthy finisher means that a ball that is hit far away may hit the ground before Sora can approach it.

A useful strategy is to equip the Berserk Charge ability, either through the copy Sora learns or the Fatal Crest Keyblade, while removing MP Haste abilities to take full advantage of Berserk Charge. When the mission begins, use Cure to enter MP Charge and activate Berserk Charge, knock the ball skyward, and continuously attack the ball. Eventually, Sora will reach the top of the map still mid-air attacking the ball and adding hits. This will continue until the MP gauge fully recharges. A good round of this can add over 100 hits. Another tactic is by spamming Thundaga to slow the ball's descent and gain bonus hits.

Mission 37: Vacation has Roxas take part in Grandstander training. There is no actual reward, but doing fifty hits or more will grant access to Mission 49: Collect Hearts later in the game. In Mission Mode, each hit gives 1 Mission Point.