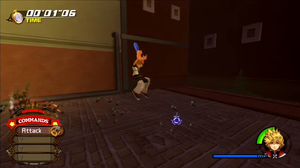 Bumble Buster (ハチたいじ, Hachi taiji?) is a mini-game in Twilight Town in Kingdom Hearts II. Both Roxas and Sora can play it, though only the former gets munny for completing the mini-game. It involves defeating honey bees in the Tram Common area in Twilight Town. Completing it faster reaps you more munny.

While playing as Sora, you are required to beat Bumble Buster in a certain amount of time in order to complete the journal.

Part of completing Twilight Town's journal entry in Jiminy's Journal involves playing this mini-game. The Jiminy Objective is to complete it within 10 seconds.

The goal is to clear out the local bees. Press

to lock onto the bees, but release the lock-on feature before swinging. This way, the yellow auto-target will zero in on whichever swarm is closest.

The key to defeating all of the bees within the set time is bringing them together with the Magnet spell. The more powerful the spell, the more likely any bees at a distance will be drawn in. Follow this up with a combo or jump in amongst them with a Fire or Thunder spell to bring a quick finish to the mini-game.