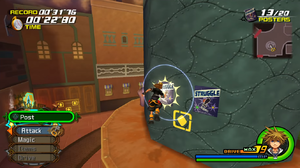 Poster Duty (ポスターはり, Posutā hari?) is a mini-game that can be played by Sora and Roxas in Twilight Town in Kingdom Hearts II although only the latter receives munny for it. In Poster Duty, Sora/Roxas has to go around the Tram Common area of Twilight Town putting up posters in designated areas. The goal is to put up 20 posters in the least time possible. The less time Roxas takes to put up the posters, the more munny he will receive.

Sora must place all 20 posters within 30 seconds to complete Jiminy's Journal's objective.

To unlock the secret ending, you need to complete Jiminy's Journal. Part of finishing Twilight Town's journal entry involves playing this mini-game. The Jiminy Objective is to complete the mini-game within 30 seconds.

The goal is to post 20 posters (that advertise the Struggle tournament) around Twilight Town. Putting up the said posters is the most time-consuming mini-game in Twilight Town, but is also the most rewarding. Run around and look for yellow rectangles with a diamond in the center. Press

when near one to "Post" a poster, or press

rapidly to apply multiple posters. Look for short routes that run by several groupings of three. One such location is the round building next to the tram.

The faster and more agile Sora is, the easier this mission becomes. Use the High Jump ability (obtained from increasing the Valor Form's level), the Aerial Dodge ability (obtained from Master Form) and the Glide ability (learned from Final Form). Rather than trying this mission repeatedly, map out a route beforehand. After placing a poster, Sora is able to use Aerial Dodge even if he used it to get to the poster.