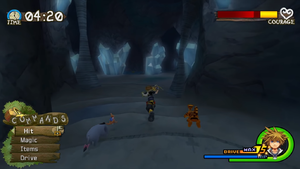 The Expotition (どうくつ探検隊, Dōkutsu Tanken-tai?, lit. "Cave Expedition") is a mini-game that is available after receiving the Torn Page that unlocks the Spooky Cave in the 100 Acre Wood. Sora can re-play the mini game by talking to Kanga.

The game consists of all the members of the story trying to find Winnie the Pooh. Sora is asked to escort the group through the scary cave. Being the leader, Sora is able to call the group to follow him or instruct them to stay behind, in the form of Reaction Commands.

There are no Heartless in this mission. Instead, Sora will face groups of flying bees that will sting him as well as the rest of the group but they can be dispatched easily with the use of Magnet. If the bees sting the group, their bravery will decrease, lowering the bravery meter. If the groups' bravery reaches zero, the group will break apart, causing each member to run around wildly. "Settle Down!" will then be available, prompting the group to rejoin.

Within the cave, there are large patches of ice that can be walked on. However, after a few steps the ice will shine a light blue, causing Sora to slip and fall over. There are also rocks that fall from the roof, much in the same way they do in the Underworld, but they can be avoided by using "Company Halt" at the right time. In the cave there is also a small amount of treasure chests.

Eventually, Pooh is found at the end of the cave, surrounded by a collection of crystal shards. He says he came here to try and remember a friend that he had forgotten.

Sora and his friends need to find Pooh in less than 90 seconds to complete Jiminy's Journal objective.

This article is a stub. You can help by expanding it.
Retrieved from "https://www.khwiki.com/index.php?title=The_Expotition&oldid=775799"
Category:
Meta category: