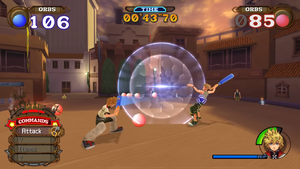 Struggle is a popular sport played throughout Twilight Town. It consists of two players who battle with foam weapons in order to knock "Struggle Orbs" off of each other. The winner is the player with the most Orbs at the end of sixty seconds.

Roxas and Hayner promise to compete in the Struggle tournament.

Struggle is a popular sport in both Twilight Town and its simulation, and one of the main forms of recreation. A single-elimination tournament is held in the town every summer, the prize of which is the Four Crystal Trophy, and a chance at a match against the reigning champion for an additional prize. Said reigning champion is the gambler Setzer, who has become very popular with Twilight Town's women. Roxas and Hayner are both interested in competing in the tournament that year.

While investigating the missing photographs on the First Day, Roxas and his friends run into Seifer and his gang. Seifer offers to let their accusation of stealing the photos slide if they get down and beg. Initially, Roxas does crouch to beg, but after hearing Hayner shout his name, he looks up and spots three Struggle Bats on the floor. Without hesitation, Roxas runs to grab one of the bats and challenges Seifer to a fight. Regardless of who wins the battle, the photograph made of Roxas is then stolen by a Dusk, which the Struggle Bat proves to be a useless weapon against.

The next day, the group encounter a poster for the Struggle posted up on the wall of Station Heights. Roxas and Hayner promise each other that they will both make it to the finals, so that regardless of the winner, all four of them will be able to split the trophy between them.

During that day, to earn money, Roxas can put up posters for the competition around the Tram Common.

The referee explains that winner of the tournament gets to take on Setzer.

The Struggle finals take place on the Fourth Day. Roxas, Hayner, Seifer, and Vivi have made it to the final four. After a quick revision of the rules, Roxas is pit against Hayner. Roxas wins the fight, knocking Hayner out of the tournament finals.

The next match is between Vivi and Seifer. Vivi flies at Seifer and aggressively knocks several orbs from him at the end of the match, then walking away. The match is declared in Vivi's favor, and Seifer withdraws from the competition altogether, telling Roxas quickly that the person he just fought was not Vivi. Seifer's withdrawal leaves Hayner in third place.

Roxas and the fake Vivi are both moved to second place and compete in a final match against one another. At the end of the match, the virtual town glitches with time apparently stopping, and the fake Vivi reveals itself to be a Dusk in disguise, with more Dusk appearing. Once Roxas eliminates the Dusks with the Keyblade, Axel appears and approaches him, remarking on his cluelessness. Claiming to "have no time for a Q&A", Axel announces that he will just have to fight Roxas, but hesitates when everything around Roxas begins to distort. Roxas tosses the Keyblade onto the floor in anger, only to have it reappear in his hand. He resigns himself to the battle.

At the end of the match, DiZ intervenes, the two of them telling Roxas that the other is lying about what is happening. Roxas clutches his head in pain and screams his friend's names, only for townspeople to suddenly unfreeze, and DiZ and Axel to have disappeared. Vivi is standing across from him and slumps as if Roxas had just defeated him in the match, although he is confused as to how he got there. Roxas has apparently won the competition, and is awarded the Four Crystal Trophy off-screen.

Roxas then gets to take on the champion, Setzer. Setzer asks him to throw the match, mentioning that he will make it worth Roxas's while, but Roxas refuses the deal.

After the tournament, Roxas and his friends go to the top of the station clock tower. Roxas breaks off the crystals from the Trophy and throws one each at his friends before taking the blue one for himself, thus "splitting" the prize between them. They each hold up the crystal to the light of sun, but when Olette reaches behind her and reveals a bunch of sea-salt ice creams, Roxas stands up quickly, imbalanced, and falls from the top of the tower. The blue crystal seemingly disappears, while in reality it is taken by Riku.

Sora fights Seifer in a Struggle match in Twilight Town.

In the real Twilight Town, Seifer apparently won the Struggle tournament, defeated Setzer and became the new champion. He is in possession of the Four Crystal Trophy, but gives it up willingly after Sora defeats a group of Nobodies partway through his journey, declaring him the "strongest guy in Twilight Town".

When Sora returns to Twilight Town near the end of his journey, he can challenge Hayner, then Setzer, and finally Seifer in practice Struggle battles. Sora must defeat each opponent ten times to be able to challenge the next one.

Some time after Xemnas's defeat, Hayner engages Seifer in a Struggle battle.

Each player begins with one hundred colored orbs. Each time a participant is hit, they drop orbs of their color, which either player can pick up to increase their score. The players have sixty seconds to collect as many orbs as possible; they can also end the match early by collecting all two hundred orbs. Opponents can be temporarily knocked out by depleting their HP gauge.

As Roxas does not have access to many abilities, his focus should be on simply acquiring more Struggle orbs than his opponent. Once he has the number advantage, he may continue fighting or simply retreat.

Sora, however, has access to many useful abilities like Draw and Trinity Limit. Trinity Limit can be used to immediately knock out all Struggle orbs out of the opponent, at which point they can quickly be collected. When not dazed, the number of orbs the opponent's drop depends on the strength of the attack used on them, so combo finishers can be useful in emptying their stock.

These are the songs that play in Roxas's and Sora's Struggle matches, respectively.

Posters for the "Struggle" tournament can be seen on walls in certain map card rooms of Twilight Town.

Posters for the "Struggle" tournament can be seen on walls during missions in Twilight Town.

Posters for the "Struggle" tournament can be seen on walls in Twilight Town.