3D shooting is a gameplay mode that appears in Kingdom Hearts coded and Kingdom Hearts Re:coded, during segments of Wonderland and Hollow Bastion II. 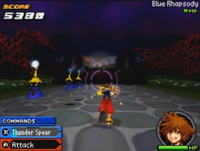 After Data-Sora finishes getting rid of all of the bugs in the datascape, an unknown force attempts to delete the entire datascape. In order to prevent the deletion—and to rescue the missing Maleficent and Pete—Data-Sora traverses the Data Tunnel as a 3D shooting stage, until he reaches Sora's Heartless in the Central Corruption area.

In 3D shooting segments, the camera is fixed behind a constantly advancing Data-Sora. Occasionally, the camera may tilt to the side or completely upside down. The segments are split up into stages, and the map shows how far away the next stage is.

Most of Data-Sora's abilities are disabled, although he can still move left and right, jump, and block. While in the air, pressing up on the control pad slows his descent, while pressing down lets him fall more quickly. Additionally, tapping

fires projectiles from the Keyblade. Holding either attack button lets Data-Sora to lock on to up to five targets, allowing him to fire projectiles that deal more damage. Taking out multiple enemies at once earns more points. Deck commands are replaced by Overlay commands, which are obtained by picking up the diamond-shaped power-ups peppered throughout each stage.

Bug Blox obstruct Data-Sora's path, and enemies attack in waves, impeding Data-Sora's progress. If he falls into a pit or collides with blox, he takes damage and, in the case of falling into a pit, then respawns after a few seconds.