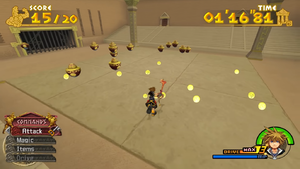 Phil uses this training to test Sora before he can enter the games. Sora undergoes two rounds of the training that involved Sora destroying barrels. At the end, Phil concluded that Sora was not too bad, but still couldn't compete in the games. He gave him the Thunder spell to master.

Roxas goes through a couple different training sessions before taking on the games, one of which is Phil's Training. Phil's Training is exclusive to Mission 36. In this training, Roxas must garner as many points as possible. The easiest method is chain-breaking. Chain-breaking is a result of Roxas either knocking a barrel into another barrel or enemy before the visible ring disappears. The larger the ring is, the greater number of points Roxas will earn. Phil ultimately wants Roxas to score at least 200 points. Should this be achieved, Phil provides no reward but does commend Roxas on his skill. However, if Roxas scores at least 100 points, Xigbar will reward him with a Bronze on day 149.

During the group's first visit to Olympus Coliseum, Sora goes to Phil and Hercules, asking to borrow the Olympus Stone to prevent their strength from draining while they are in the Underworld. While Hercules goes to fetch the Olympus Stone, Sora decides to train with Phil. Phil introduces a few new features this time. Now Sora has to destroy pots and collect the orbs that drop from them.

Bust all barrels within the time limit!

Break the barrels and shoot for a high score!