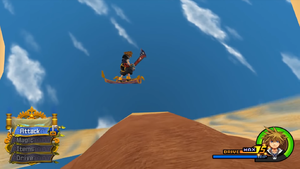 Scoring 65 points is required to satisfy Jiminy's Journal, which means slaying all but two Heartless.[citation needed]

This game reenacts Sora's escape via Carpet from the crumbling ruins in the desert after the party is tricked by Jafar. The goal is to defeat as many enemies as possible. Larger enemies like Fortunetellers and Crimson Jazzes can only be defeated with combo finishers, making the Negative Combo ability a valuable tactic. In addition, flying enemies can be hit into Fat Bandits on the ground below, scoring extra points. Falling debris can cause damage, so dodge carefully.