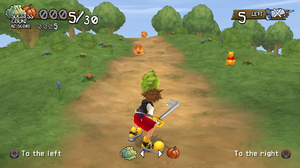 Veggie Panic (野菜パニック, Yasai Panikku?) is a mini-game found in the 100 Acre Wood in Kingdom Hearts Re:Chain of Memories.

Sora must help Rabbit sort his vegetables. To start the minigame, the player must talk to Rabbit after the cutscene in the second room of the 100 Acre Wood. The player has to knock vegetables rolling down a hill to the correct side of the screen, and keep Pooh from getting hit by the rolling vegetables. Cabbages are supposed to be knocked to the left of the screen with

, and pumpkins are supposed to be knocked to the right of the screen with

To win the minigame, Sora must sort at least 30 vegetables. The first time he clears the minigame, Rabbit will award Sora the Cross-slash+ Summon Sleight.

This article is a stub. You can help by expanding it.
Retrieved from "https://www.khwiki.com/index.php?title=Veggie_Panic&oldid=855143"
Category:
Meta categories: