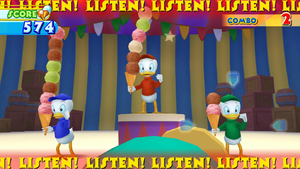 Ice Cream Beat (リズミックアイス, Rizumikku Aisu?, lit. "Rhythmic Ice") is a mini-game in Kingdom Hearts Birth by Sleep, playable exclusively in Disney Town. The purpose of the mini-game is to match the beat of a song in order to operate an ice cream machine and produce ice cream stacks that are as tall as possible.

Upon arriving in Disney Town, Ventus is confronted by Captain Justice and is mistaken for a person in trouble. They both hear Huey, Dewey, and Louie complaining about something and run over to investigate. When Captain Justice asks what the "crisis" is, Huey explains that they want Queen Minnie to try their new ice cream recipe, but their Ice Cream machine isn't working. Captain Justice tries fixing it, through the unhelpful method of brute force, but fails and gives up. Ventus then tries helping them by trying out the machine the right way, helping the boys pile scoops of ice cream up. Ventus plays the Ice Cream Beat mini-game, and wins, leaving the machine good as new, much to the chagrin of Captain Justice, but to the relief of Huey, Dewey, Louie and Queen Minnie.

Ice Cream Beat can be played with five songs, with each at either Beginner Mode or Master Mode difficulty; Master Modes for each song are unlocked when the respective Beginner Mode is cleared with a rating of "Cool" or higher.

After choosing the song and difficulty, Huey, Dewey, and Louie will begin clapping out the beat for a section of the song. The protagonist must then parrot the beat by pressing

while aiming the crosshairs with the analog stick or directional pad to match the duck who performed that clap. Each successful match results in a scoop of ice cream being launched onto that duck's cone, but if a cue is missed, the current combo will be broken and several scoops will fall off. However, there is no penalty for shooting out of turn. Performing twenty accurate beats in a row will cause rainbow-colored lights to flash.

The final score is determined by the total height of the ice cream scoops at the song's end, and the length of the longest combo. These scores determine the ratings, which are named "Bad", "Good", "Cool", and "Fantastic" from lowest to highest. By achieving a "Fantastic" rating, the protagonist will be awarded with the prize for that song and difficulty.