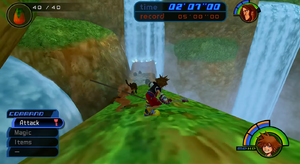 Jungle Slider (ターザンスライダー, Tāzan Suraidā?, lit. "Tarzan Slider") is a mini-game in Deep Jungle in Kingdom Hearts. The player has to collect as much red fruit as possible, while sliding down the trees and avoiding obstacles. The mini-game is accessed by jumping into the open tree trunk from the Tunnel. After each attempt, the player must return to the Tunnel to play again. Before Deep Jungle's Keyhole is sealed, only the first course is available, without the fruit. The fruit collection begins after the Keyhole is sealed.

During this mini-game, the only party member with Sora is Tarzan. There are five areas in the slider, with ten fruits each. To advance to the next area, Sora must collect all the available fruits. Upon completion of one challenge, a reward is gained, and a path to the next course will be unlocked from the next attempt on. The Keyblade can be used occasionally to break the vines/branches that block him. In addition, the player is timed as the game is played.

The Red Fruits needed to unlock rewards and courses.