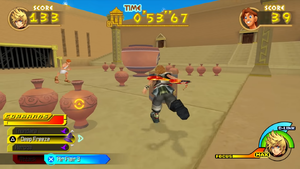 Break the Urns mini-game from Kingdom Hearts Brith by Sleep.

Break the Urns is a mini-game in Kingdom Hearts Birth by Sleep that can be played in Olympus Coliseum. When playing Break the Urns, one must face off against Hercules and break more urns than he does within one minute and thirty seconds. Beating Hercules for the first time unlocks the Sonic Blade command; additional victories award Panaceas.

This mini-game has to be played twice in order to advance the story in Olympus Coliseum.

In order to prove to Phil that he is worthy of becoming his student, Hercules asks Ventus to train with him.