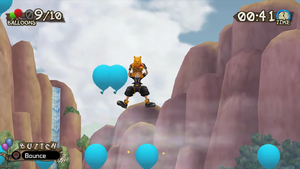 Sora encounters Kanga and the others in her house, trying to make Pooh recover his memories. To do this, Kanga suggests Pooh to drink a remedy, in chance to have his memories back. However, Tigger arrives and takes the potion from Kanga's hands, and understands it as a gift for him. Sora then tries to retrieve the potion from Tigger, who says that the remedy is not what Pooh needs, and that just a couple bounces would make him better, so Sora and Pooh go jump with Tigger. After successfully accomplishing the mini-game, Pooh remembers Tigger's name, but Sora still remains unknown for him.

Sora's objective when he first plays the mini-game is to bounce on at least 10 balloons. Doing so ends the mini-game and moves the story. When Sora plays the mini-game again, he can test himself to see how many balloons he can pop in three tries. If he reaches the topmost balloon, his score will increase dramatically. Sora must achieve 2,000 points or more in order to complete a Jiminy's Objective.

Like most of the 100 Acre wood mini-games, this is really easy. At first Sora and Pooh will start on a trampoline like structure, once Sora and Pooh land on a balloon they will bounce a little high in the air giving them a chance to land on another balloon. Pressing triangle at the right time before landing on a balloon will result in the two bouncing even higher, possibly into another row of balloons, use a combination of short jumps and high jumps and the mini-game should fall with ease. If you are good enough, you can short jump a row of balloons then high jump the last one to get to the next row and repeat until you complete the minigame, this is helpful for completing the Jiminy's Journal requirement.