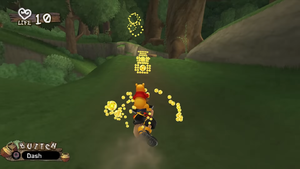 Hunny Slider (ハチミツスライダー, Hachimitsu Suraidā?) is a mini-game that appears in Kingdom Hearts II. It is played in the 100 Acre Wood after obtaining the second Torn Page. When you play it the first time, you need to collect Hunny without knocking Pooh's HP to 0. The mini-game can be played by talking to Rabbit.

Pooh is searching for hunny at Rabbit's House as Sora appears. When Pooh eats all the hunny and asks for more, Rabbit says that he does have more, but that he hid them and can't find them. So Sora and Pooh engage in a search for more Hunny, all around the book. After successfully gather hunny, Pooh gets satisfied enoughly to remember both Eeyore's and Rabbit's names, However, he still doesn't remember Sora's name, and still calls him "Somebody-I-don't-know"

Sora and Pooh need to collect 8000 points before they get to the finish line to complete Jiminy's Journal objective.

The objective of this minigame is to gather as much hunny as possible. To do that, you'll have to collect the hunny orbs by simply passing through them. However, if you are hit by any object, Pooh will be launched away from you, which will not allow you to collect more hunny until the Reaction Command is used to carry Pooh again. Luckily, Gopher will serve as a support, making you immune to one object, thus not losing Pooh in the process.