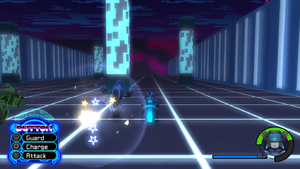 The Light Cycle (ライトサイクル, Raito Saikuru?) is a mini-game in Kingdom Hearts II and Kingdom Hearts 3D: Dream Drop Distance that is based on a game which appears in the 1982 movie Tron.

After Goofy fiddles around with the computer in the holding cell in Space Paranoids, Sora is forced to participate in the Light Cycle races. Before the race starts, a Devastator blasts a hole in the wall, and so during the race, Sora battles off his Magnum Loader opponents to reach the exit.

After getting captured by a Recognizer and meeting Sam Flynn, Riku is forced by CLU to play a round of Light Cycle. After derezzing numerous Guards, the Commantis appears, which Riku battles. The Dream Eater flees after its defeat, while a fed-up Riku blasts a heart-shaped hole in the stadium wall and escapes, eventually reuniting with Sam.

A Light Cycle makes a cameo appearance while Sora and his friends look for a required piece of data that is necessary to turn on the power and escape, with Donald playing on it.

The Light Cycles in The Grid, on the other hand, are nearly identical to the ones in Tron: Legacy. Riku's Light Cycle is equipped with two turrets that resemble Identity Disks. These turrets, when on standby, rest on the back wheels; when active, they float near the front wheels.

The Light Cycle mini-game operates under a rock-paper-scissors-esque attack system. Normal attacks are deflected with Guard, but can intercept Charges, which can break through Guards. If Sora drives into a wall, he will take damage.

The Light Cycle controls are much simpler here than in Kingdom Hearts II, and consist of:

The ultimate goal of the Light Cycle mini-game is to destroy 30 Heartless.

The first time Riku participates in the Light Cycle, he is required to play until the Commantis appears. A variety of enemies appear to try to stop him.

Afterward, Riku can return to the Light Cycle track in order to play the mini-game version. Here, he attempts to take down as many opponents as possible to obtain points.