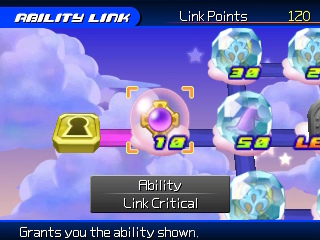 The Ability Link is a board where the player can acquire new Commands and Abilities in Kingdom Hearts 3D: Dream Drop Distance. Each Spirit-type Dream Eater has a different Ability Link which includes different commands and abilities, which can be redeemed with Link Points (LP) by the player. New commands must be installed from the Command Deck menu, while new abilities are automatically installed. However, Stat Abilities only stay active while the Spirit from which they were acquired remains in the party.

An Ability Link is composed of various icons connected by colored paths, each one being a bonus, with the needed LP to acquire them on their bottom right. The Keyhole icon shows where the Ability Link starts. In the beginning, every icon is connected by blue paths and are inside crystal shields, meaning they are blocked and can't be acquired yet, with the exception of one, that is inside a bubble and is connected by a pink line to the Keyhole icon. By trading that bonus, the lines connected to that icon will turn pink, breaking the shields of the icons connected to them, allowing the player to acquire those bonuses. Some paths are unlocked only if the Spirit is in a certain Disposition. There are also some door-like icons that represent quotas needed to further continue the way to other bonuses. These can require the player to have a certain amount of a certain item, level up the Spirit to at least a certain level, or even Link with the Spirit a certain number of times.