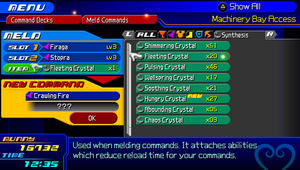 The Command Meld menu can be accessed at any time. It depicts all commands that can be melded, a list of melding ingredients, and, if the required Recipe has been obtained, the new command that will be produced as the result of command melding, as well as the ability it will have.

Command Meld (コマンドチャージ, Komando Chāji?, lit. "Command Charge") is a system in Kingdom Hearts Birth by Sleep that replaces the traditional item synthesis. Like Materia Fusion in Crisis Core -Final Fantasy VII-, Command Meld allows the character to create new Deck Commands by combining specific pairs of Commands. Most Commands must be mastered in order to be used as ingredients. Furthermore, synthesis materials such as the Fleeting or Abounding Crystal can be added to the mix. Although this does not change the resulting Command, it attaches a certain Ability to it, depending on the Crystal used and the meld it is applied to. If one of the ingredient Commands already has an attached Ability, the resulting Command will also have an Ability of the same category, and it is also possible to have an Ability attach to the resulting Command completely at random. It is also possible for the Command created to immediately upgrade to a Rare Command; several powerful Commands and all meldable Shotlocks can only be created in this manner.

Although the Command Meld menu lists any sets of compatible Commands together at all times, it does not list the resulting Command until its Recipe is obtained. Unlike the Recipes in Kingdom Hearts II and Kingdom Hearts 358/2 Days, the Recipe items cover all melding combinations of the same type (Block, Action, Magic, or Attack) and class (Basic, Advanced, or Ultimate). Furthermore, any set of Commands can be melded without their Recipes; a Recipe simply lists what the resulting Command will be.

Note: The "type" IDs given here originate from the Ultimania, and are used throughout the wiki to identify which abilities can be attached to a command.