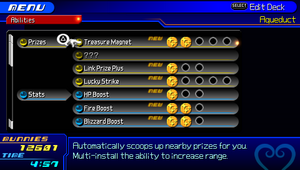 The Abilities screen in Kingdom Hearts Birth by Sleep. Shown are the Prize and Status abilities.

Instead of requiring AP to activate abilities, the system in Kingdom Hearts Birth by Sleep has the player attach a set ability to the Deck Commands that they create through the Command Meld process. Each command recipe has a certain set of abilities that can be attached to the finished product, with the result depending on the crystal applied to the ingredients.

Once an ability is attached to a command, it is activated by adding that command to the Command Deck. Once the command is mastered, the ability is permanently added to the list of abilities, even if the command is removed from the deck, and it can be freely turned on or off. It is possible to acquire multiple copies of many abilities by repeating this process.