"Dual-wielding" redirects here. You may have been looking for Synch Blade.

Roxas is not able to use his Synch Blade at first because of Xion's existence, but her destruction awakens the ability, which he activates as he begins his assault on The World That Never Was. However, he is confronted by Riku, who defeats him and drags his unconscious body back to Twilight Town, where he is given false memories in order to keep him complacent within the simulated Twilight Town. However, by the sixth day there, Roxas has regained his memories, and when Axel attacks him for leaving the Organization, Roxas summons the two Keyblades and defeats Axel.

Later, when Sora enters The World That Never Was, he is accosted by Roxas, who is once again dual-wielding Oathkeeper and Oblivion, and the two Keyblade wielders battle inside Sora's Dive to the Heart. During the fight, Sora is able to take Roxas's Keyblades and use them against their owner, delivering the fatal blow.

A few months later, when Roxas is brought back into existence during the Second Keyblade War, he is still able to use his Synch Blade ability, thus allowing him to duel-wield his Oathkeeper and Oblivion once more to help Sora and the Guardians of Light against the thirteen seekers of darkness. 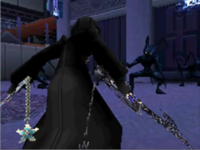 Roxas utilizing both Oathkeeper and Oblivion for the first time in the World That Never Was before the battle with Riku in Kingdom Hearts 358/2 Days.

In the Story Mode of Kingdom Hearts 358/2 Days, Roxas can only dual-wield the Oathkeeper and Oblivion during the first half of Mission 93. However, in Mission Mode he can wield the two Keyblades by equipping the Zero Gear with three Ability Units.

Roxas's ground combo begins with two slashes, left to right, then a spinning move, all done with a simple press of the

button. From there, a

-Combo is prompted, which will lead the combo into another two slashes, left to right. Another push of the

button will result in another slash with the Keyblades, then an upward slashing movement with some spin. With one final push of the

, Roxas's Keyblades will spin around him and fly into his hands, causing damage to enemies. When a normal combo is continued, it will lead into another set of two slashes, followed by another slash with some spin. Roxas will slide forward, a Keyblade extended, and slash with his other hand as a follower, and it will conclude with Roxas poising his Keyblades behind to him, then unleashing a devastating X-like slash with both weapons.

The aerial combo begins with two quick slashes to the left and right, followed immediately by a mid-air slash with some spin, two moves that could easily be mistaken as one. Another

-Combo is prompted, which will result in an early usage of the aerial combo's finisher. The normal combo continues with another set of two slashes, one going up and another going left, which is followed by a sideways slash along with a powerful uppercut. The combo finishes with Roxas's Keyblades flying around him dangerously, then him catching them with powerful posture.

In Kingdom Hearts II, Roxas is only able to dual-wield Oathkeeper and Oblivion during his fight against Axel. In this state, Roxas can do a five-step combo both on the ground and in the air, with his ground finisher a spinning slash that can knock enemies airborne and his aerial finisher being similar to Sora's Hurricane Blast finisher. In Kingdom Hearts II Final Mix, during the boss fight against Roxas, Sora can steal Oathkeeper and Oblivion by pressing The End during Roxas's Duel Attack and telekinetically wield the twin Keyblades in conjunction with his own Keyblade. The Keyblades react according to Sora's actions, spinning around Sora during normal attacks and piercing through Roxas during finishers.

In Kingdom Hearts III, Roxas becomes an ally of Sora against Saïx, still being able to dual-wield Oathkeeper and Oblivion. For the Re Mind scenario, Roxas is playable (only during the Saïx fight) and retains most of his dual-wielding abilities along with a few new tricks to give him the upper hand in combat. His Dual Shot finisher involves him twirling his Keyblades, shooting out a ball of light straight at the opponent for heavy damage.