There are two Command systems that appear in the Kingdom Hearts series: the Command Menu and the Command Deck. 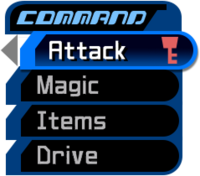 The Command Menu allows the player to execute the highlighted action, which can be chosen from the various options. In certain circumstances, some commands in the menu may be blanked out or disabled, either before certain functions are introduced to the player, during periods when certain abilities cannot be used, or when an ability or attack has disabled commands.

The recurring commands that appear in the Command Menu are:

In Kingdom Hearts II, additional commands are added to the Command Menu, along with a second page accessible by pressing

Kingdom Hearts III removes the Limit, Drive, and Party commands, adding the Link Summon. The Player is now able to choose and switch between three different Keyblades by pressing

The bottom-most command in the Command Menu in Kingdom Hearts changes in function depending on the situation. For example, it will change to display "Open", "Save", or "Examine" when approaching a Treasure Chest, Save Point, or an object of interest, respectively. In battle, this command will also change to allow access to special abilities.

when the command appears above the Command Menu. The command that appears may be determined by abilities that are equipped, enemies that are being fought, or objects that are nearby.

As noted above, the HD 1.5 Remix version of Kingdom Hearts Final Mix uses Reaction Commands in place of the context-sensitive command from the previous releases, to improve ease of use in combat.

In Kingdom Hearts, the

In Kingdom Hearts 358/2 Days, shortcuts are added by highlighting entries from the Magic or Item menus, then holding down

and pressing the standard buttons of

. Subsequently, the player can hold down

while in the field, then press the face button corresponding to the desired command. However, if all the panels for that command are removed during panel management, or if the current stock of a item has been used up during a mission, a new shortcut is required to be set up for that button.

In Kingdom Hearts Birth by Sleep and Kingdom Hearts 3D, action abilities like Dodge Roll, Block, and High Jump are incorporated into the Deck Command system in a separate list of slots.

While most of these commands will cause the user to quickly drop to the ground to activate them in both Birth by Sleep and Re:coded, a larger majority of them can now be used freely in midair in Dream Drop Distance, save for item commands.

The Base Command (ベースコマンド, Bēsu Komando?) is permanently mapped to a single action button,

in Japan) for Kingdom Hearts Birth by Sleep and

Attack is mapped to the base command by default, but the base command is context sensitive, allowing the player to execute other actions in the field with the action button, including "Talk", "Open", and "Examine". Additionally, under specific circumstances, Finish commands, Reprisal commands, and Reaction commands are activated by the base command.

In Kingdom Hearts II and Kingdom Hearts III, the feature to change the command menu into a world-specific design is present. This has no impact on the gameplay other than acting as a cosmetic upgrade. However, if the player finds the animated menus too intrusive the option to change to the default one in the settings menu is present at all times.

In Kingdom Hearts III, a small glitch occurs if the player changes the design while in the opening Olympus chapter that causes the "???" fourth slot to change to "Link", even without a Heartbinder in the inventory, though the command itself remains unusable.