Valor Form is a Drive Form specializing in physical attacks which appears in Kingdom Hearts II. It uses Goofy, and consumes three of Sora's Drive Bars. It represents Sora's strength,[1] and is obtained along with Sora's new clothes at Mysterious Tower. Its emblem is a red fleur-de-lis.

Valor Form turns Sora's clothes red and white with the fleur-de-lis emblem on each sleeve and pant leg. In this form, Sora wields two Keyblades, and is also very dexterous, sometimes even spinning the Keyblade on a single finger during a combo. No matter what world Sora is in, Sora's hands glow light red and flicker with red electricity. When Sora runs in Valor Form, flakes of red energy fly off of his hands in a streak.

Valor Form is a melee-oriented Drive Form that can wield two Keyblades, but cannot perform any magic. Its play-style is highly aggressive, utilizing a number of combo finishers and attacks that knock enemies into the air. Valor Form runs quicker than usual and can jump very high.

Valor Form is a powerful damage-dealer, and is very useful against single targets, such as tough enemies and bosses. While in Valor Form, Sora moves at twice his normal speed[citation needed], and can perform combo finishers at any time with Omega Finale. His rapid slashes can block enemy attacks, and can sometimes stun the enemies as well. However, Sora also becomes unable to cast any Magic, including Cure, so equip Potions and set Donald's behavior to healing-focused whenever Sora uses Valor Form. The lack of Magic, coupled with an inability to Guard, makes Valor Form the weakest Form defense-wise. As such, it is best to take advantage of the increased movement speed and jump height to evade attacks while looking for openings, then quickly moving in to deal damage.

Since Valor Form levels by dealing hits, and not by defeating enemies, try to keep enemies alive while training Valor Form. The best Keyblades for training Valor Form are the Sweet Memories and Oathkeeper; the Star Seeker and its Air Combo Plus are a good substitute for the Oathkeeper if it is unavailable. The Morning Star and Crimson Jazz Heartless, which appear together at Hollow Bastion and Beast's Castle, are the best enemies to train against, as they have high stamina, but are also easy to disrupt with Valor Form's attacks and drop a large amount of Drive Orbs when defeated. In Kingdom Hearts II Final Mix, both Mushroom XIII No. 5 and Mushroom XIII No. 11 allow Sora to deal a large amount of hits while being close to a save point, allowing him to quickly refill his Drive Gauge. If defeated, they will also drop some Drive Recovery items.

In contrast, when using the form for combat purposes, it is best to equip the strongest Keyblades available. The damage dealt can be maximized by equipping the Decisive Pumpkin, Sleeping Lion, Hero's Crest, Star Seeker, or Rumbling Rose, due to their Combo Boost, Combo Plus, Air Combo Boost, Air Combo Plus, and Finishing Plus abilities, respectively. 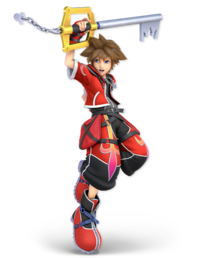 Sora's Valor Form appears in Super Smash Bros. Ultimate as an outfit variation for Sora. Sora's stance will change to that of the Valor Form while holding a one-handed item.