"The heart may be weak, and sometimes, it may even give in. But I've learned that deep down, there's a light that never goes out!"
—Sora

Kingdom Hearts is the source of all light.

Light (光, Hikari?) is a force parallel to darkness, a strong element used in Synthesis items, and may also be used as an attack in the Kingdom Hearts universe. Although often associated with the forces of good, light is not entirely benevolent; for example, Xemnas uses Roxas's power over light against Sora and Riku in his last stand. The Realm of Light is also one of the three known realms in the Kingdom Hearts universe, along with the Realm Between, and the Realm of Darkness.

The first light Kingdom Hearts came from the darkness in which the world began in and from the light came people. When the Master of Masters was a boy, an earlier war began with a conflict between the physical manifestations of light and darkness. This conflict continued without end for an unknown period of time.

Before the Keyblade War, the five Unions collected Lux. However, due to Nightmare Chirithy's intervention, the Keyblade wielders began to accuse each other of stealing it. Knowing that the world would end in darkness, it was Master Ava's role to create a group of separate of wielders, called the Dandelions, that would avoid the war to preserve the light.

The Dandelions was tasked of preserving light by reliving their past memories in a data version of Daybreak Town, but the peace did not last as one of the willful darknesses hid inside Ventus. When Darkness was extracted from him, Ventus became pure light and was going to use it to change the entity into something the Union leaders could destroy. Seeing that Darkness was right about the data town being destroyed and five pods left, the Union leaders separated, with Ventus, Lauriam, Elrena, and Brain leaving for the real world while Player, Ephemer, and Skuld stayed behind to protect the other Dandelions until they could find a way for them all to escape. Meanwhile, in the real world, Luxu sent off his own seed of "light" into the future.

The χ-blade, which acted as the counterpart and key to Kingdom Hearts, was forged from pure light and darkness. The violence of the Keyblade War shattered it into seven pieces of light, and thirteen pieces of darkness.[1]

Master Xehanort reveals to Terra, Ventus, and Aqua that the Keyblades found in the Keyblade Graveyard are the remnants of Keyblade wielders that fought in a legendary battle known as the Keyblade War. This war took place between the forces of light and the darkness. Light is also revealed to be one of the two forces required to create the χ-blade. The weapon is born from a conflict between equal forces of light and darkness. Vanitas, a being of pure darkness, is able to create the χ-blade after battling Ventus, a being of pure light. Ventus's light is equal to Vanitas's darkness since Vanitas is the embodiment of Ventus's extracted darkness. 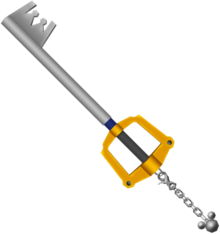 A Keyblade, used by chosen wielders of light.

In Kingdom Hearts, the roles of light and darkness play very typical roles as in most games, with light being the force of "good" and the protagonists, and darkness being an evil, opposite force used by the antagonists. Since the Keyblade is a light-affiliated weapon and the entire quest is about closing the Door to Darkness and eliminating the Heartless, the entire story is very biased in a light direction. One important belief about light is that there is always "a light in the deepest darkness". This plays a role many times in the story, including when Sora opens the Door to Darkness and finds a blinding light inside with King Mickey. Even through all of the bias towards light, it is still a balance with a closed Door to Light and a closed Door to Darkness.

In Kingdom Hearts Chain of Memories, light does not play as much of a role in Sora's game, since the main enemy is Organization XIII, who are not beings of darkness.

The most significant story development about light in the story is Riku's constant struggle throughout the game between him and the darkness in his heart. He tries to shun the darkness and Ansem, Seeker of Darkness out of him, but he cannot do it. Because of this, Ansem taunts him that darkness is his destiny. There are many times when Ansem almost completely plunges Riku into darkness again, but he is always saved by King Mickey's light. Riku finally experiences an epiphany when he talks with Naminé (disguised as Kairi) after being confronted by Zexion, in the guise of Sora, who blinds him with light. Riku finds that darkness is not evil, and he should use it along with light to help defeat his enemies and give him more power. This changes Riku, and Ansem, thinking that Riku has turned to the darkness, mockingly tells him that he was right about Riku's destiny. Riku fights Ansem and destroys him.

At the end of the story, DiZ asks Riku which path he wishes to take. He decides to take the road to dawn, a path leading from darkness to light.

Both Roxas and Xion have the ability to use light in battle since they are both ultimately derived from Sora. This is most noticeable in their Limit Break, Black Hole, in which their Keyblade is shrouded in light. In their Final Limit, they also release pillars of light. Two other characters, Riku and The King, also have the ability to use light in their Limit Breaks and Final Limits. Riku's weapon is engulfed in light during his Final Limit, and The King's Limit Break releases bursts of light.

Sora, Roxas, King Mickey, and Riku use the power of light. After Xemnas absorbs the remains of Kingdom Hearts, he uses both the powers of light and darkness in his final battle against Sora and Riku.

Aware that the worlds were in danger again while fighting the Demon Tide, Aqua vowed to become a waypoint of light for anyone that ends up in the Dark Realm.

After obtaining of X-blade, Master Xehanort utilizes the light of Kingdom Hearts along with his own dark powers against Sora in their final battle.

The Door to Light opening.

Light can also be manipulated into attacks by some beings within the Kingdom Hearts universe with a strong affinity for it, most notably being Sora and his Nobody, Roxas. Similar to members of Organization XIII's usage of their respective elements, these two are able to physically call and wield the element of light. Roxas's light powers, however, were originally more advanced than Sora's; he is capable of creating spears and force fields out of light. Sora initially was only capable of using it to augment a select few of his combo finishers, such as Explosion. However, he also can call to his power of light in his Final Form, during which he can use fighting techniques similar to Roxas's.

Sora's ability to use light grows by Kingdom Hearts III, wherein he uses light based attacks in many of his Formchanges. Light is seen most prominently in Ultimate Form, the shotlock of which consists of Sora creating a massive sphere of light that explodes and deals heavy damage to enemies. Light Form and Double Form also exhibit many advanced uses of light, the latter of which sees Sora using several attacks nearly identical to that of his Nobody. Roxas additionally demonstrates the unique abilities to teleport to enemies in a burst of light and fire multiple bolts of light as his Situation Command. However, he lacks a Shotlock and, like Sora, does not use Light magic in his arsenal of spells. Xion, as a party member, uses Light to perform her powerful Laser Rain attack, sending twelve pillars of the element to strike the enemy from above.

Other Keyblade wielders, such as Mickey and Kairi, also demonstrate proficiency with the use of Light. Both are capable of using Light to conjure a protective barrier and casting "Pearl". Mickey is particularly advanced, capable of countering the attacks of the Replica Xehanorts with powerful, continuous streams of Light with the aid of Sora.

Ventus also shows to have an affinity for light-based attacks. He can use several light-based commands like Salvation and Faith, and his ultimate Finish Command, Stratosphere, combines both light and wind into a devastating attack. Aqua also uses light in the four variations of her Deck Command Magic Hour, in where she sends orbs of light spiraling upwards. During the Final Episode of Kingdom Hearts Birth by Sleep, Ventus's sleeping form is able to summon his Keyblade and open the Door to Light, leading himself and Aqua back to their home of Land of Departure.

On multiple occasions throughout the Kingdom Hearts series, characters have been able to wield light in unique manners not similar to those above. Most notable are the Princesses of Heart, who are able to use their inner light to help those in need. For example, after Sora sacrificed himself and became a Heartless in Kingdom Hearts, Kairi used the light in her heart to turn Sora back to his original form.

In Kingdom Hearts II, Sora is able to open the "Door to Light" in the Realm of Darkness, at the Dark Margin. By using the light in his own heart, Sora was able to return himself and Riku to Destiny Islands.

Although she is not a Keyblade wielder or Princess of Heart, Queen Minnie has control over light; when she assists Sora during the Heartless invasion of Disney Castle, they can perform a Reaction Command in which a beam of light falls on her, and releases a shockwave of light; she also occasionally casts "Pearl".