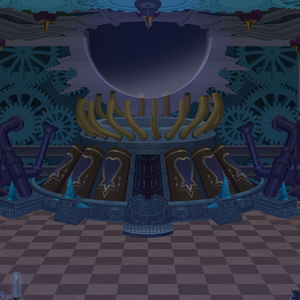 The lifeboats that are kept in the basement of Daybreak Town's Clock Tower.

A lifeboat (箱舟, hakobune?, lit. "ark") is a device used to travel across worlds and through time. In Kingdom Hearts Union χ, some of the Dandelions use the lifeboats to escape the collapse of Daybreak Town.

According to Darkness, the lifeboats are intended for traveling between worlds, not through time, even though they are capable of doing so. Additionally, although the lifeboats can travel to and from the data world as well as travel through time, they cannot do both at once. Quest 960: To the Race Track! Pt. 5 Using a lifeboat is the only known way to travel through time without giving up one's body. However, doing so requires the traveler to have a "medium" with which to rebuild their body as well as someone with memories of them at their destination.

After Maleficent's departure, Luxu uses one of the lifeboats in the real Daybreak Town to send a cloaked figure that he calls "the true Dandelion" to the future. Quest 977: Darkness Looms

Later, Lauriam, Ephemer, Skuld, Brain, Ventus, and Elrena use the remaining lifeboats to escape from the data Daybreak Town. The lifeboats are able to be transferred between the real world and the virtual world, as Brain appears to send two lifeboats from the real world back to the data world for Ephemer and Skuld. Quest 979: The Final Battle

Terra-Xehanort sends Kairi to another world in the lifeboat.

Hollow Bastion has a similar lifeboat device to the one in Daybreak Town. This one has five lifeboats instead of seven. During the Heartless invasion of Radiant Garden, Terra-Xehanort captures Kairi and places her in the lifeboat, explaining that he seeks the Keyblade by sending her to see if her heart will resonate with a Keyblade wielder's. Kingdom Hearts Melody of Memory

The lifeboats seen in the World Terminus.

Sora discovers Hollow Bastion's lifeboat device at the World Terminus through the terminal for Hollow Bastion. He finds a computer terminal at the front which displays the text:

Ones born of the heart and darkness, devoid of hearts, ravage all worlds and bring desolation. Seize all hearts and consummate the great heart. All hearts to be one, one heart to encompass all. Realize the destiny: the realm of Kingdom Hearts. The great darkness sealed within the great heart. Progeny of darkness, come back to the eternal darkness. For the heart of light shall unseal the path. Seven hearts, one Keyhole, one key to the door. The door of darkness, tied by two keys. The door to darkness to seal the light. None shall pass but shadows, returning to the darkness. Ones born of the heart and darkness, hunger for every heart until the dark door opens.

The lifeboat device from Hollow Bastion is seen again in Kairi's memory of Radiant Garden.

The lifeboats are brown, cylindrical containers large enough to contain a person. They have a single door that hinges open from the top. On the outside, they have metallic decoration and a tinted, heart-shaped window that resembles the Heartless emblem. The interior features a similar metallic decoration that resembles circuitry. Their inner workings appear to contain blue and red wires, as seen from the lifeboat that was destroyed in the clash between Lauriam and Maleficent.