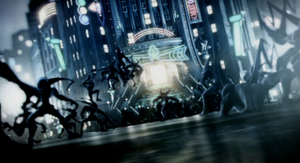 The hooded boy fights off an army of Neoshadows.

A hooded Roxas walks through the Dark City in the pouring rain. He stops, feet away from the base of Memory's Skyscraper. Roxas looks up at the screens; shortly after, his head shifts down as many Neoshadows rise up from the ground and surround him. A blindfolded Riku, wearing a black coat, stands on top of Memory's Skyscraper and stares down at Roxas. Roxas draws the Oathkeeper in his left hand and Oblivion in his right. He spins the Keyblades above his head, yielding sparks, and holds them out to his sides. Riku tilts his head up to the sky and holds his arms out; the clouds above the Skyscraper part to reveal a meteor shower. A white-purple outline of the Heartless emblem surrounds Roxas. Riku takes off his blindfold and throws his head back. Roxas mouths something.

On a beach, an older Kairi runs to the edge of the sand and puts her hands behind her back, watching a single meteor fall.

Another Side, Another Story [deep dive][edit]

Roxas arrives at the Dark Margin in Another Side, Another Story [deep dive].

Sora stands in the middle of the Crossroads, looking up at the night sky.

A message in a bottle arrives on the shore of the Dark Margin, as the wave recedes.

A fragmented tale
A world without you
The eyes will close

A white Heartless emblem appears on a boulder for a split second, before Roxas passes through it. One of his eyes - golden yellow - is briefly shown, and he walks forward.

In the Dark City, Roxas walks towards the Memory's Skyscraper in the pouring rain. Clashing blades sound, and in an instant, he is surrounded by numerous Neoshadows, now holding Oathkeeper and Oblivion. Roxas engages the Heartless and easily destroys three.

He continues, slashing them with his Keyblades, not hesitating to resort to kicking two of them. Three Neoshadows jump high in the air. Roxas looks up at them and follows suit, doing a backflip. The three Neoshadows land on the ground, one on top of the other, and dissolve into darkness. More Neoshadows leap into the air, and Roxas proceeds to slash at them as he rises; he uses Strike Raid with Oathkeeper and eliminates four of the airborne Heartless. The Oathkeeper returns seconds before Roxas lands on the ground, and he backflips up to the porch of Memory's Skyscraper. As other Neoshadows beginning to crawl up the structure's gargoyle statues, he looks out at the horde of Heartless. He looks up at the screens of the Skyscraper.

Riku stands atop the screens, looking down at Roxas. He smirks; Roxas mimics the action and jumps onto a post, leaps to an extrusion on the wall, and begins running up the side of the Skyscraper, Oathkeeper and Oblivion held out at his sides. Neoshadows begin to chase after him, as new ones emerge from above, which Roxas promptly cut down. Riku walks up to the very edge of the Skyscraper's screens.

The Oblivion slices through one more Neoshadow before Riku catches it; his body turns, now parallel to the Skyscraper as three more of the Heartless leap down after him.

11
Behind the darkness ≠ Door to the light

The two approach the Skyscraper's largest screen; Roxas, now wielding the Kingdom Key in his right hand, runs past the bottom of the central screen while Riku falls.

The two pass each other, turning their head to the other before continuing on their way. Faint images of Kairi flash on the video screen as Riku falls. The clouds above Memory's Skyscraper clear, revealing three rays of light.

9
A world between = A forgotten world
The gathering

Roxas mouths something as he and Riku continue on their paths.

VIII
The third enemy = Nobody "Who is Nobody, you ask? They are the nonexistent ones."

Roxas has flashing images of Sora during his Dive to the Heart.

More flashes of Sora's memory. Roxas walks up to the hooded figure sitting on a rock.

6
The Thirteenth Order
Metamorphosis
"Sora?"
"Sora...Why?"
"Your Highness! But why?"

An older Kairi watches the meteor shower on Destiny Islands.

Riku plummets to the ground.

A Black Coated King Mickey flips through the air, landing on the rooftop of the Memory's Skyscraper with the Kingdom Key D held behind him.

Back at the Dark Margin, Roxas approaches Xemnas again; he turns to Roxas and speaks to him.

Sora then flies over a vast expanse of ocean, seemingly asleep, under a cloudy sky.

"Everything is coming back to me, the true..."

Another Side, Another Story [deep dive][edit]

The conditions to unlock the videos Another side, Another story... and Another Side, Another Story [deep dive] vary according to the difficulty level chosen:

[deep dive] replaces Another side, Another story... if the conditions are met. Neither one is accessible on Final Mix: Beginner difficulty.

Another Side, Another Story [deep dive]

Another side, Another story... was meant as more of a concept trailer, showing whatever ideas Tetsuya Nomura had for a sequel at the time; it was not meant to be taken as an actual part of the storyline for the games. Kazushige Nojima, the scenario writer, explained that, after the story for Kingdom Hearts II was written, he had to go back and find places to put in the seemingly random quotes found in both Another side, Another story... and Another Side, Another Story [deep dive]. The idea of the Keyblade wielder was affixed to Roxas, and the blindfolded male to Riku.