Yuna, Rikku, and Paine, also called The Gullwings (カモメ団, Kamome-dan?), are a group of treasure-hunting fairies. They have minor roles in Kingdom Hearts II. The name refers to the sphere-hunting group that the three girls are a part of in Final Fantasy X-2.

Artwork of Rikku as she would have appeared in Kingdom Hearts.

In Kingdom Hearts, Rikku was supposed to make a solo appearance as a member of Leon's group in Traverse Town; however, because of the similarly-named character Riku, she was replaced with Yuffie, who was then given a version of the outfit planned for Rikku. Yuffie's version has the same design, but the colors are swapped.

In Kingdom Hearts II, the Gullwings receive a new appearance, seeming to be small pixies. The reason for making the Gullwings "pixie-like" beings was because Tetsuya Nomura wanted to have Final Fantasy characters appear in a non-human form that still appeared human, and the Kingdom Hearts series seemed to be the ideal scenario to do so. He chose their fairy forms, as he believed that they would look interesting and because he believed that the screen would be too crowded if the camera focused on all three of them at once if they were in their normal human forms.

In Jiminy's Journal, the Gullwings are called the "Friendly-neighborhood-something-or-others", a reference to a line in Final Fantasy X-2, in which they called themselves the "Friendly neighborhood Gullwings", which is a further reference to the Marvel Comics character Spider-Man, who is often referred to as "Your Friendly Neighborhood Spider-Man". Jiminy's Journal never mentions the name "Gullwings", instead only copying the description the girls gave themselves in the middle of Final Fantasy X-2's story.

Sora, Donald, and Goofy first encounter the Gullwings in their second visit to Hollow Bastion, where the Gullwings inquire about the recent activities of Leon's group. Sora tells them that they are busy at the castle. Rikku nearly reveals that they are working for Maleficent, but Paine quickly stops her from doing so. She assures Sora that they come in peace and then teleports away. Yuna and Rikku follow, but not before Yuna apologizes to Sora and company for bothering them.

They reappear during the Battle of the 1000 Heartless, shortly after Sora, Donald, and Goofy defeat a massive amount of both Heartless and Nobodies, and ask what happened to Maleficent. Sora informs them that Maleficent ran away, and they call her lame, revealing that they had indeed been working for her and noting that they picked the wrong side. Sora asks them to help out the Hollow Bastion Restoration Committee; Yuna accepts and asks if Leon has any treasure. Donald, knowing that the Committee needs all the help it can get, lies that he does (proving it by chuckling to himself after they leave). Sora asks who they are, but Yuna tells him that they are nothing worth mentioning, just "three treasure fanatics", and teleports away.

During the war, Paine lures an Armored Knight Heartless into a trap, and Yuna and Rikku double-team it and knock it off the edge with two simultaneous jump-kicks. Shortly afterward, a massive legion of Armored Knights chases them off.

The Gullwings escape, however, and discover that they had been tricked, confronting Sora and friends after the war. After a brief discussion with each other on how to work it out, they decide to take their treasure in retribution; when Sora declares that they have nothing, Rikku searches them, and Yuna declares that they are taking all of their items. However, Sora downright refuses, much to their frustration. Sora begins to apologize for the deception, but Paine stops him and reveals that Leon had informed them of their fight against Organization XIII and their search for their friends, and how rough their journey had been. They decide that it wouldn't be right to take their items after all that they had been through and assure him that they will root for them. They give Sora the Gull Wing Keyblade as a sign of forgiveness and then depart after performing their trademark pose.

After Sora returns home to Destiny Islands, the Gullwings are seen stealing a stick of sea-salt ice cream from Yuffie and provoking her into chasing them.

True to Final Fantasy X-2, the trio sport their trademark pose, but without their weapons.

Another change to the trio is their less revealing attire as opposed to their outfits in the original game, which showed more skin. Yuna now wears a short skirt rather than hot pants, and her top is now less revealing and the symbol on it - a tribute to Tidus - is smaller. Rikku now wears a tank top instead of a bikini top, although her midriff and navel are still exposed, her bikini bottom straps are no longer visible on her hips, and she now wears stockings. Paine now wears a tank top with visible shoulder straps and her boots no longer have high-heels. Minor changes to Rikku's skirt and sleeves and Paine's stockings and shawl were made as well. Also, the three fairies each have wings that are unique to them. Yuna has a hair clip resembling bird wings, Rikku's wings are the long, loose ends of her scarf, and Paine has black, bat-like wings.

None of the girls' names are mentioned, besides Yuna's nickname, as Rikku whispered it to her when they confronted Sora and co. about tricking them, but are said in the English dialogue outside of non-subtitled whispering between the trio, possibly to prevent confusing Rikku with Riku. Paine also mentions Rikku's name in a text box if Sora talks to her before talking to Yuna after the battle.

While the Gullwings' physical appearances have changed, their personalities have not: Yuna is unfailingly kind-hearted and polite, even bowing in respect to Sora, Donald, and Goofy and apologizing to them for bothering them; Rikku is good-natured and ditzy, the latter of which shows when she nearly reveals to Sora and friends who they were working for; and Paine is emotionally distant and anti-social. However, it would seem that they are more like mercenaries in this game, working for Maleficent in exchange for treasure, and agreeing to work for Leon only if he pays them to do so; when confronting Sora, Donald, and Goofy, Yuna bluntly calls them liars, Rikku complains about Leon not having any treasure, and Paine says, "And we fought for you guys," almost as if it was a crime to help someone out without receiving payment. Nonetheless, they do seem to have a strong moral compass, as they decide to let Sora and co. off without consequence upon hearing of his fight with Organization XIII and search for his missing friends, as they believe that punishing them for doing the right thing is just not right.

The Gullwings are portrayed as much weaker than their Final Fantasy incarnations, or even other warriors like Yuffie and Leon. It takes a combined effort from all three to defeat one Armored Knight, one of the weaker types of Heartless. They mostly rely on hand-to-hand combat, although they are also able to hover, warp, and conjure belongings like their Gull Wing Keychain. 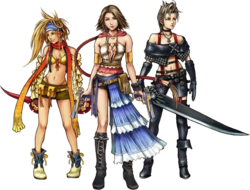 The Gullwings are a band of sphere hunters. The group formed in the first direct sequel to a Final Fantasy game, Final Fantasy X-2. The Gullwings were banded for the purpose of hunting spheres, invaluable items scattered across Spira containing information about its past. More importantly, their goal throughout the game was to locate information regarding a man who looked exactly like Tidus, who appeared in the first sphere the Gullwings uncovered.

Rikku is an Al Bhed, a once-exiled race that utilized machina, technology once forbidden by the laws of Yevon. Despite the intense racism aimed at the Al Bhed, she manages to keep a stiff upper-lip with her energetic and upbeat personality. She is also Yuna's maternal cross cousin.

At the outset of Final Fantasy X-2, Paine is a taciturn swordsman shrouded in mystery, while progressing through the game reveals more and more of her past.