Kingdom Hearts Concert -First Breath- is an official orchestral concert of Kingdom Hearts music performed by a full concert band. The concert was announced on the Kingdom Hearts Japanese Twitter page[1] on April 26, 2016. A website was created to promote the concert, which premiered on August 11, 2016 in Tokyo Japan.

The performance was about an hour long and features fourteen different pieces of musical arrangements from the Kingdom Hearts series. The pieces were performed by a symphonic concert band. Additionally, Tetsuya Nomura announced via Twitter the week before the concert debuted that the Japanese voice actors for Terra and Naminé would be present at each of the performances.[2] The program featured a conversation between Terra and Naminé portrayed by their voice actors, which is considered canon to the series and was featured in the Kingdom Hearts Orchestra -World Tour- guide. 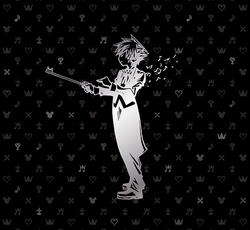 An album for the concert was announced for public sale on May 25, 2017 and features all, of the pieces planned to be performed at the concert. Originally, Square Enix had no plans of releasing the concert in CD or DVD form. The album released on July 26, 2017 for 3,300 yen. On October 2, 2017, it was announced that the album would be released in North America on October 31, and in Europe sometime that same month.

This conversation between Terra and Naminé was performed live at each performance. A transcription of the exchange was included in the Kingdom Hearts Orchestra -World Tour- guide, labeled as "Secret Story from Kingdom Hearts Concert -First Breath-". According to Tetsuya Nomura, the conversation connects to and precedes Terra's appearance in Kingdom Hearts 0.2 Birth by Sleep -A fragmentary passage-[5].

Naminé: Don't worry. You might forget about me, but with our promise, I can come back. Yes, one day the light – it will be ours, and it will bring us together. I'll then – I'll be in your heart.

Sora: Right. Forgotten – but not lost.

Lingering Will: That's it. Your power. That's what I felt within you. The power that connects to Aqua. And to Ven's heart.

Naminé: In your memories. Traces of you were lost, so I found you through memories belonging to those you've met in the past.

Terra: Who are you?

Naminé: I'm Naminé. It's nice to meet you. I'm a witch who can control peoples' memories.

Naminé: Right now, you're bound to two memories. One belongs to you, the other belongs to an unspeakable darkness –

Naminé: Your heart will soon encounter a familiar light. You must make sure she isn't lost to the darkness. You must guide her.

Terra: Her? You mean Aqua? I'm not sure what I can do to help, not like this.

Naminé: You must fight, Terra, like the others. You mustn't let your heart melt into darkness: follow your true memories, and you'll reach the light. She's headed there too – to the same place. You must believe in your promise, just as she continues to believe in you.