Play Arts were a set of officially-licensed action figures for Kingdom Hearts, made between Square Enix and Japanese figure company Kotobukiya, and are part of Square-Enix's much larger Play Arts line. The Play Arts line ended in 2010 after Square Enix ended the contact with Kotobukiya and switch over to a new revamp line of figures; Play Arts Kai.

Each figure is fully articulated and comes with one or two props related to the game, usually weapons. The figures were released as follows:

Five special edition figures of Sora were released, one for each of his Drive Forms.

This series features characters in their original Kingdom Hearts designs; the released figures are as follows:

The characters in this set include: 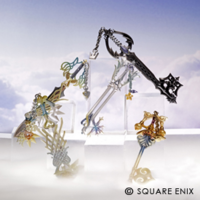 In August 2008, a set of five extra Keyblades, called Play Arts Arms were released to go with the existing Play Arts figures or to display separately. The collection includes: