The Memorial Stained Glass Clock is a large clock displayed at Shinjuku Station's Tokyo Metro Marunouchi Line Metro Promenade from January 9 to January 15, 2017, in commemoration of the fifteenth anniversary of the Kingdom Hearts series.[1]

The clock is composed of thirteen stained glass pieces mimicking the Stations of the Dive to the Heart; the central piece is larger and uses the art of Roxas's Stations of Serenity and Awakening, while the other twelve are smaller and placed around the central piece at the hour positions. The six o'clock piece is taken from the sole Station in Kingdom Hearts χ[chi], while the other eleven are original pieces based around existing Key Arts. Each individual piece is, on its own, a functional clock, although while on display, the central clock piece runs backward at an exaggerated speed.[?]

An 80" television display is placed next to the pieces, playing clips from the series compiled into an hour-long video alongside a countdown for the release of Kingdom Hearts HD 2.8 Final Chapter Prologue. The current plan is to also put up a huge mural of the the main characters in the series alongside a small exhibit of other clips and visuals from the series.[2] 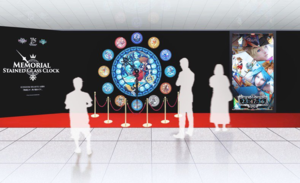 Concept art of the display.

At the end of the event, all thirteen pieces will be given as gifts to winning fans. Participants must follow the official Kingdom Hearts Twitter account, and upload a photo of their favorite stained glass piece from the event with the hashtag "#キングダムハーツ15周年". The photos can either be taken by the fan themselves or selected from the campaign's website. If selected from the website, the auto-completed tweet will include a unique hashtag for each piece.[?]

From October 14 to November 10 in 2017 the Square-Enix cafes in Tokyo[3][4] and Osaka[5] and had a special Kingdom Hearts campaign were customers could get coasters based on the Memorial Stained Glass Clock stations. All original Disney characters were removed, resulting in the replacement of 7 o'clock piece with a new Terra station while also three new color variant of the center piece, based on the Station of Calling in Kingdom Hearts II, and Ventus's Soul World station from Kingdom Hearts Birth by Sleep were introduced.

In 2018, some of the Memorial Stained Glass Clock artworks were used as motives for the stained glass medals in Kingdom Hearts Union χ[Cross] to celebrate eight million game downloads.

In Kingdom Hearts III Re Mind, the 2 o'clock, 4 o'clock, 8 o'clock, and the alternate 7 o'clock pieces were used as the basis for the stations of Riku, Roxas, Aqua, and Terra, respectively.