Alice is put on trial in the Queen of Hearts' kangaroo court.

Alice's trial is an ordeal that took place in Wonderland. The Queen of Hearts wrongly accused Alice of "assault and attempted theft of (her) heart," put her on trial and sentenced her to beheading. However, Sora, Donald, and Goofy gatecrashed the trial and were determined to prove Alice's innocence. 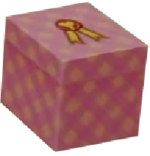 When Sora and the party arrive at Wonderland, they witness the Queen of Hearts accusing Alice of stealing her heart and putting her on trial because of it. Sora intervenes and tells the Queen that he would gather evidence to prove Alice's innocence. During his search, the Cheshire Cat appears to give Sora some clues and then later rewards Sora with the Blizzard spell, once he succeeds in gathering four pieces of evidence.

When Sora returns with the evidence, the Queen adds her own evidence to Sora's so that there are five pieces of evidence in total. Then she tells Sora to pick one box of evidence at random, which Sora finds to prove that the Heartless are the real culprits. This infuriates the Queen, so she locks Alice in a cage and calls her Card Soldiers to fight Sora and his party. The Card Soldiers use the Crank Tower to keep Alice's cage out of reach.

After Sora defeats the Queen, Alice is found missing from her cage, a mystery later solved when she is revealed to be a Princess of Heart.

The incident of Alice's trial return in the form of memories of Sora's, during his time in Castle Oblivion. However, this time around, Alice is instead accused of stealing the Queen's memories and put on trial but she is saved when Sora claims he is the thief and fights off the Queen's soldiers.

Within the data version of Wonderland, Data-Sora finds Data-Alice to discover that she has lost all of her memories. By Data-Sora finding and using Inklings, Data-Alice recalls that she was lost so she asked the Data-Cheshire Cat for directions. The cat suggested that she visit the Data-Queen of Hearts' castle; however, the card soldiers attempted to take her captive and put her on trial. Fortunately, Data-Alice managed to escape before they caught her.

In Kingdom Hearts, Sora must first gather evidence to support him in the trial. Collecting all four pieces rewards him with Blizzard early. Otherwise, Blizzard is learnt after unlocking Wonderland's Keyhole.