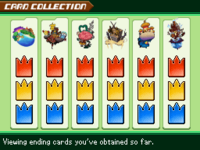 A full collection of Ending Cards.

An Ending Card (エンドカード, Endo Kādo?, lit. "End Card") is a type of card found in Kingdom Hearts Re:coded. They are found in Castle Oblivion and are proof that Data-Sora has reached a certain ending in the card's illusory version of its world.

There are three Ending Cards for each world:

Only one Ending Card per world is required to advance the story. Upon obtaining all eighteen Ending Cards and using the Castle Oblivion card, Leon and Yuffie will appear at the door and reward Data-Sora with a Debug Device: Y and a Heat Sink Belt.