i'd actually like zexion with the quote "Your hopes are nothing but a mere illusion"--ShadowsTwilight 16:58, 17 August 2009 (UTC)

Your Talk Bubble is now complete. To use it, COPY/PASTE the following code and insert it to a talk page. Type text between the = and the )). DO THIS WITHOUT A SPACE!

It appeared to be a simple black and white of Vanitas's Keyblade, but I see what you did now. However, it's still completely unneccesary - by the very nature of Absent Silhouettes (which the Sentiment appears to be), it's the same Keyblade, and we do pages for forms, not individual Keyblades - there's no "Roxas's Kingdom Key", "Sora's Kingdom Key" set of pages. This could maybe go as a gallery entry on the main V's K page, if you can get a better crop.Glorious CHAOS! 17:28, April 9, 2010 (UTC)

I really don't like that you reuploaded the image before getting a response, though.Glorious CHAOS! 17:28, April 9, 2010 (UTC)

First off, the Sentiment appears to be a Silhouette (speculation), second of all the silhouettes weapons and the other forms of the keyblades were the exact same as the others. this one is completely recolored and it has a different keychain, so it seems to be a different keyblade to me. and as for you not liking what i did with the uploading, suck it up. ShadowsTwilight 17:33, April 9, 2010 (UTC)

Might I suggest just adding the VS's Keyblade's description to the Design section on Vanitas's Keyblade? See Frozen Pride and Frozen Pride+? The Keyblade doesn't really warrant its own article, but it's worth mentioning.--Lapis ofthe Night 17:37, April 9, 2010 (UTC)

I recall you doing this same thing with Lea's page, suggesting that we merge Roxas and Sora. Weapons are not the same thing as characters. Vanitas is a separate being with a role in the story, while VS is a secret boss with many similarities and differences to Vanitas. The Keyblades, on the other hand, only differ in color and (apparently, I for one can't see very much of the Keychain at all) their Keychains. They are used in exactly the same way.--Lapis ofthe Night 17:42, April 9, 2010 (UTC)

a) that was sarcasm. b) the same argument could be made for some of the days weapons yet they are all considered different weapons (and rightfully so) what makes this any different. they arent even wielded by the same being. (p.s. you have to look real colse but i guarantee the keychains are different) ShadowsTwilight 17:48, April 9, 2010 (UTC)

for example, true light's flight and darker than dark. the only difference between them is there colors, and they are two different weapons ShadowsTwilight 17:51, April 9, 2010 (UTC)

Ah, those are made by using different Gears (the Wild Gear and Hazard Gear, respectively), have different abilities, and different stats. For Vanitas' and VS' Keyblades, however, we don't have any stats or any indication from the way they are used that they have different capabilities.--Lapis ofthe Night 17:54, April 9, 2010 (UTC)

As I had said, if it's anything like the Absent Silhouettes, then VS literally is Vanitas's Keyblade, come to life. There is also absolutely no difference between the "two" Keyblades, except that the VS Keyblade has had the colors removed - it even has the same shading. There's no information besides that to be put on the article.Glorious CHAOS! 04:30, April 10, 2010 (UTC)

What the hell are you talking about? the absent silhouettes weren't the weapons come to life. where are you getting that?ShadowsTwilight 23:45, April 10, 2010 (UTC)

Even if that is true, we have no proof that vs is an absent silhouette, other that it's little orb form looks slightly similar. i do not think speculation is a valid argument. ShadowsTwilight 11:23, April 12, 2010 (UTC)

In that case, what proof do you have that they are in any way different weapons, aside from their color schemes? We don't have that much information on either weapon, so why would VS's Keyblade warrant its own page? It would make more sense to just merge the two. Also, notice how we didn't make a page for the Lingering Sentiment's Keyblade, even though that was a secret boss' weapon too.--Lapis ofthe Night 19:46, April 12, 2010 (UTC)

What? Why wouldn't we need articles for those Keyblades? Those are all unique weapons (except perhaps Vanitas's) used by actual characters, not just a secret boss with a palette swap of Vanitas's weapon.--Lapis ofthe Night 23:58, April 12, 2010 (UTC)

We don't know yet weather you can reverse age or not in KH, it's up to Nomura. It would make sense to have him in his younger incarnation at the end or at some point since he's trying to gain a younger body, there's no reason he wouldn't try to regain his younger body. -- Keyblade Master Timaeus

I know that, im not complainig about it, we know nothing yet, its all speculation which we should really refrain from, but an edit was put there that covers all possibilities on the matter. It now reads ' it is currently unknown what from he will take. Pretty much covers it all so no more need for editing there. So no worries about it, no bother done or caused. -- Keyblade Master Timaeus

Look, if you don't believe me, go check the game's release date on Amazon. It says it exactly!! User:ToyaLynk/Sig

Ok listen up. you can make fun of my typing as much as you want, but let me tell you this. When Tinkerbell was saved by Terra, she told Peter Pan that a man with a large sword saved her. That man with a large sword was Terra. Terra was the first to visit Neverland and wasw followed by Ven shortly after. If you don't believe me, then do this. Get to the Neverland Levels in both Ven's and Terra's Story and do them both. And LISTEN carefully. Obviously you don't have Kingdom Hearts BBS, which I do. I was just trying to put the story in Chronological order. Because after Tinkerbell was captured in Ven's Story, she was saved in Terra's story after that. Both of Ven's and Terra's stories in neverland were indirectly crossed with Tinkerbell. So mok me all you want. but at least I still have a thinking brain.

All right then Let see you do better[edit]

Ok then, if you think that your so good, let see you try making the BBS section in Tinkerbell's page more descriptive. Because honestly, i think there should be a little more than that short paragraph of an article than there is, thats why I kept putting back in what i'd put. Catch you around, Pendeho

I agree that the soul eater releases hearts, but I still disagree it is a keyblade because in Kingdom Hearts 2 if you saw the 1000 Heartless Battle, Cloud was using his Fusion Sword and Leon was using his Revolver Gunblade both released hearts, explain that one--BlazeCannon15 04:21, November 6, 2010 (UTC)

what do you mean I have more?

then allow me this, why is the soul eater considered a keyblade if all those others weapons I mentioned releases hearts--BlazeCannon15 19:40, November 6, 2010 (UTC)

Trust me I have read, The Soul Eater in my opinion is a sword of darkness and riku's keyblade is a keyblade of light. Lets just say it's a sword that does that. I onl played 4 games of KHs and I know for a fact it is not a keyblade and I am only 17--BlazeCannon15 23:57, November 6, 2010 (UTC)

Lets leave can you delete y message on kryten userpage Lets call it a keyblade till further notice--BlazeCannon15 00:22, November 7, 2010 (UTC)

so can you make talk bubbles for me of MArluxia please using his best quotes cause I do not know how to make one--BlazeCannon15 00:29, November 7, 2010 (UTC)

What did i say wrong?[edit]

I noticed that you "unedited" my section for the Larxene boss in RE:com. but why? I own a copy of RE:com and i just tested this theory. its works! i just "spammed" sonic blade and used a high potion to reload then spam it again. and this is in proud mode Level 43. It worked against the Riku replica to! I'm not trying to complain, I'm just trying to clear this up a bit.

How did you get your signature to always display the template? If I put {{User:Soxra/Sig}} as my signature in preferences, it auto-replaces it with {{SUBST:User:Soxra/Sig}} (which actually substitutes the text into place, as you can see if you take a look at the source after this post). How'd you get yours to not do that? [[ Soxra ]] 23:38, November 22, 2010 (UTC)

you make yourself look like an idiot, when you say thing like "i don't know what you're rambling but...i'm talkinga bout something that you guys clearly already stopped".

I'm talking about adding a policy page, next to manual of style, so we don't have to link conversations with users that serve like policy. they say no, but i'm thinking it's just because it's coming from me. If someone with high reputation said they wanted one, i bet they'd agree.Bijinder 00 04:11, December 9, 2010 (UTC)

If I may offer an alternative? White also goes with red and green as holiday colors.

This is a friendly reminder that your user trivia is due December 7, 2014! You have three days!

Hey there, Shadows, this is an invitation for you to take part in our end of year event! You can sign up as either a participant or a judge and we'd love it if you could come aboard. Thanks! TheFifteenthMember 22:06, 30 October 2015 (UTC)

The ball is finally rolling! Please take a look at the instructions here and send in your two 200x200 pieces ASAP. I will check your progress in a week! TheFifteenthMember 19:38, 14 March 2016 (UTC)

Another reminder to let me know how you're doing. It's very important that you do so! TheFifteenthMember 20:59, 21 March 2016 (UTC)

My first piece is done, I'm just not sure where to submit it, the second one is still in progress and should be done shortly--ShadowsTwilight

And where does Kingdom Hearts χ Back Cover fit on this list?

Congratulations! You are the winner of the 2017 End of Year Event Trivia Quiz! Here's your award: 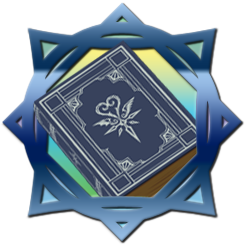