"I wasn’t sure you’d wake up. I hoped you would. I wanted to show you. I… don’t have anyone else. I think a lot about meteors. The purity of them. Boom. The end. Start again. The world made clean for the new man to rebuild. I was meant to be new. I was meant to be beautiful. The world would have looked to the sky and seen hope. Seen mercy. Instead they'll look up in horror because of you. You've wounded me. I give you full parts for that. But, like my old man said, what doesn't kill you... just makes me stronger!"
—Ultron 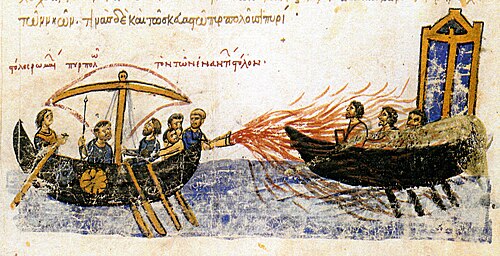 Greek fire was the secret weapon of the Eastern Roman Emperors. It is said to have been invented by a Syrian Engineer, one Callinicus, a refugee from Maalbek, in the seventh century (673 AD). The "liquid fire" was hurled on to the ships of their enemies from siphons and burst into flames on contact. As it was reputed to be inextinguishable and burned even on water, it caused panic and dread. Its introduction into warfare of its time was comparable in its demoralizing influence to the introduction of nuclear weapons in our time. Both Arab and Greek sources agree that it surpassed all incendiary weapons in destruction. The secret behind the Greek fire was handed down from one emperor to the next for centuries. Rumors about its composition include such chemicals as liquid petroleum, naphtha, burning pitch, sulfur, resin, quicklime and bitumen, along with some other "secret ingredient". The exact composition, however, remains unknown. For a thorough investigation of the weapon one can refer to Professor J.R. Partington's book, "A history of the Greek Fire and Gunpowder", Heffer, 1960. This volume quotes the ancient authorities extensively, with an excellent commentary. It also examines ancient and modern theories on the composition of the chemicals used in the Greek Fire. This is considered the most up to date source on the subject.

Greek fire has made many appearances in media like in the film Pirates of the Caribbean: On Stranger Tides it is used as a naval weapon by the character Blackbeard, as well as in the video games Assassin's Creed: Revelations and Medieval II: Total War: Kingdoms. Both the academic discussion around Greek fire and a medieval demonstration of it appear in the 1999 novel Timeline and its 2003 film adaption. A similar substance, known as "wildfire", is used in a naval battle in the book A Clash of Kings by George R. R. Martin. This green substance is deployed in fragile clay jars, never from tubes, and is apparently partly magical in nature, but, like Greek fire, it burns on water. A self-igniting liquid was referred to as "Greek fire" in Season 1 Episodes 7-11 of the BBC America television series Copper. Greek fire was used in the episode "The Mask of Doom, Part III" of the Fantastic Four 1994 TV series to thwart the Persians and Dr Doom. Greek fire is a common weapon used in the Percy Jackson & the Olympians series, as well as its spin-off series, The Heroes of Olympus. Rick Riordan's version of the weapon is green, however. Called Byzantine fire, it was used in the last episode of Robin Hood (2006 TV series). Greek fire also plays a part in the saving the city of Boston from destruction in the novel, "The Technologists" by Matthew Pearl (Random House, 2012).