This is a list of Mickey Mouse's forms and costumes in the Kingdom Hearts series. 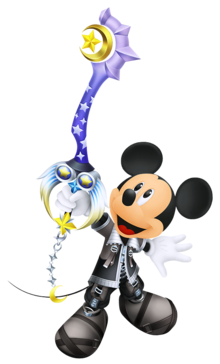 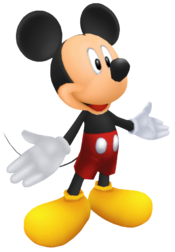 Near the end of Kingdom Hearts, Mickey sports his classic Disney attire: a pair of white gloves, red shorts with two white buttons on the front, and large, yellow shoes. This outfit is a partial version of his attire from Kingdom Hearts 0.2 Birth by Sleep -A fragmentary passage and Kingdom Hearts Chain of Memories, with his shirt destroyed due to a Demon Tide attack. 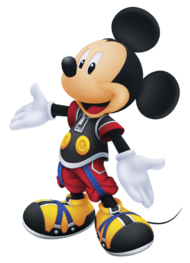 In Kingdom Hearts Chain of Memories and Kingdom Hearts 0.2 Birth by Sleep -A fragmentary passage, Mickey wears a black vest with white lining, two yellow buttons near the bottom, and a zipper that only reaches about halfway down the vest. Under this vest, he wears a black, short-sleeved shirt, white-lined color scheme as his vest, though the cuffs of the sleeves are red. His pants are red and quite baggy. The pockets have white lining. The front of Mickey's pant legs are pulled up slightly by elastic, blue straps. Mickey's shoes are yellow, but the tips and lower halves are black and the soles are white. Each shoe has two blue straps that intersect over the top of the shoe. 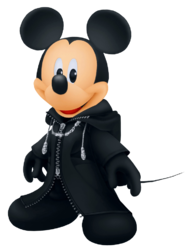 During Kingdom Hearts 358/2 Days, Mickey wears the black coat, gloves, and shoes that Organization XIII members wear. Though largely the same as the other coats, Mickey's apparently has contortions in the hood for his ears, and the drawstrings on his version sport Hidden Mickey symbols on the tips. He also wore the black coat in the early stages of Kingdom Hearts II before discarding it during the Battle of the 1000 Heartless. 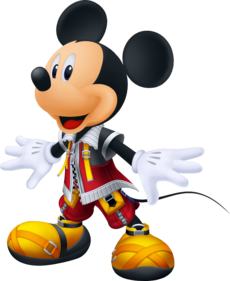 In Kingdom Hearts II, Mickey sports a modified version of the outfit he wears in modern Disney cartoons, which also becomes his default costume in the Kingdom Hearts series. He wears a short-sleeved jacket with white lining. The top half of this jacket is black, while the bottom half is red, and there are two yellow straps dangling in front of it. His pants are red and sport a zipper going down the front of each leg. Each leg also has a yellow pouch with a black strap that partially cover the zipper, as well as a blue strap on the outer side of each pant leg. Mickey wears very large, yellow shoes with grey backs and two orange, intersecting straps attached to the front of each shoe. 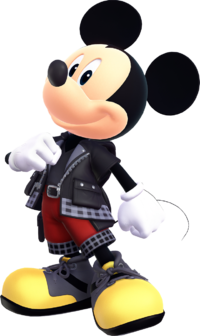 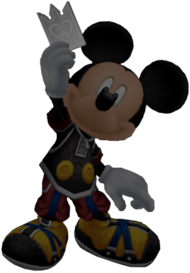 While on Castle Oblivion's Halloween Town floor, Mickey's skin takes on an ashen and slightly decayed look. Similarly to Riku, Mickey's outfit remains the same. This version is exclusive to Kingdom Hearts Re:Chain of Memories. 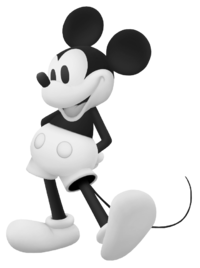 When Mickey was a resident of Timeless River, he is colored in grayscale like the other inhabitants of the world. He is modeled after his appearance in older Disney cartoons like Steamboat Willie. Mickey has large eyes that take up the majority of his face. His fur is black, as are his ears, which are simple black circles. Like in the older cartoons he is from, no matter which direction Mickey himself is facing, his ears are always facing the screen. He wears white gloves, white shoes, and white shorts with two buttons on the front.

Country of the Musketeers version[edit] 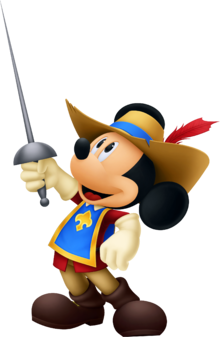 While training as a musketeer, Mickey's outfit is modeled after his appearance in the 2004 Disney film Mickey, Donald, Goofy: The Three Musketeers. He dons a long-sleeved, red shirt, khaki pants, ivory-colored gloves, and dark brown, leather shoes with golden buckles. He also wears a blue tunic with a wide gold border, and a gold fleur-de-lis on the chest. On his head is a slightly tattered, light brown cavalier hat with a blue ribbon tied around it and a red plume on the left side. 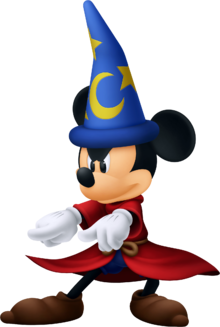 While training under Yen Sid during Kingdom Hearts 3D: Dream Drop Distance, Mickey's outfit is modeled after his appearance in the Fantasia short The Sorcerer's Apprentice. He wears a red robe, which is tied together by a brown rope, over a pair of dark blue shorts, and brown moccasin slippers. On his head, he sports Yen Sid's sorcerer hat, which is decorated with three large, yellow stars and a crescent moon.