You may know me as Xemnas8. You see I've decided to change my Username because with a name like Xemnas8, I'm kinda restricted to having talk bubbles and profile pics as Xemnas. See I'm used to Runescape where nearly every name is taken. With this new account, I'll be able to have any talk bubble image and go on any wiki. Xemnas8 will still be active but I'll barely be on it. So bye Xemnas and say Hello to Axeken.

I, Axeken, love the Kingdom Hearts Series. It is tied with the God of War Series. I'd say Kingdom Hearts is my favorite kiddie game and God of War is my favorite adult game. My second favourite game is Sonic the Hedgehog 3 (I love old 2D games). I'm an Australian so the only KH game I don't have (that isn't Japanese) is Kingdom Hearts Re:Chain of Memories but other than that I have all KH games. I also have most of the English KH Videos form KH, KH FM, KH COM, KH Re:CoM, KH 358/2 Days, KHII, KHII FM, KH BbS, KH Re:coded. I also have most of the KH Music and a lot of KH Pics. If you want a video, song and/or pic, tell me and I'll try and upload it on the website. I think I'll try to get any of the latest KH News and post them in the Forums until I'm a little more know than I'll put them on my talk page. My Sources will be heartstation.org [1],kh2.co.uk [2] and kh-vids.net [3]. The News I'll add will be Ultamainia News, Game News, Interviews and other major KH News starting on the 20/11/2010 Aus Time. Any advice or objections, please tell me on my Talk Page.

This theory aren't about the games' story but about the Kingdom Hearts games production. First after BbS FM and Re:coded are released, Normura will announce the KH3D's real name (right so far). After 3D, I think Square-Enix will make Mickey's and Riku's Absences on the Wii, maybe, and probably make a 3D Final Mix. Just Theories. Then make a collection for PS3 with, at least KH, Re:CoM & KHII (maybe BbS and their Final Mix Version). Then make Kingdom Hearts III and make a KHIII Final Mix which will hint to what the next Saga will be about.

My Theory about this game is: It takes place after Blank Points and Signs of What's Next. Mickey will tell Sora and Riku to Yen Sid's Castle then Yen Sid will tell them about the Mark of Mastery Exam. Then, with his magic, he'll put Sora and Riku into a Dream like some sort of Matrix type thing. Since the Mark of Mastery Exam only takes place for a bit of the game (See [4] (10th paragraph-ish)) the rest may be about Riku's Absence in KH1 when Riku may remember/dream when he was with Maleficent which is why he is in his KH1 clothes. Some other back-up for this accusation is in coded when Data-Riku show Data-Sora the Memory thing when Riku and Kairi where in Neverland and Riku pretends to grab to moon and clutch it to his heart. Also in A fragmentary passage, Riku is seen holding Kairi in Neverland, my guess this occurs right after my previous sentence, like he stares at the moon, looks at Kairi, picks her up, then looks where to go next which may all point to either part of 3D is Riku's Absence or an entirely new game for it (please be the former). And that's all I've got for now.

Nomura has announced in the Director's Secret Report XIII that Mickey's absence will be in the Realm of Darkness. In A fragmentary passage, The King was in his Chain of Memories outfit with the Star Seeker in the Realm of Darkness which could hint to his own game. If Mickey goes to worlds in the Dark Realm, he'll probably go to remnants, like when Aqua found the Castle of Dreams, doing something like help to repair it somehow. For some reason, I think they may make a movie for this one like FFVII: Advent Children or they'll put it on the Wii. If they do put it on the Wii, I think they should add a Joke Weapon, like in 358/2 Days, being a paintbrush Keychain for him to refer to Disney's new game Epic Mickey.

The first gaming console I ever had was the original Playstaion. Me and my brother played it to death. For my Mum's birthday, Dad bought her a PS2. Mum barley played it, so me and my brother played and bought many games. Then one winter holidays mum bought me a GameBoy Colour and my brother a GameBoy Pocket. We liked them but there were barley any games for them, so when we were on holidays we traded both consoles and games (we only had two between us) and bought a GameBoy Advance with Harry Potter as our first game. When I was a big fan of Pokémon, I bought nearly all the games of them. Then one Christmas, I got a new Nintendo Upgrade and got a Nintendo DS Lite (YAY) with Pokémon Diamond as my first game and got more games for it. Next X-Mas my bro got his own Nintendo DS Lite and I used it to my advantage to trade Pokémon and mum bought a new PS2 because our old one was getting really old. Then in another X-Mas, we got a Nintendo Wii. I liked it (and still do) but found out that there were no good games for it. When I found out Birth by Sleep was coming out, I had to get it but there was one problem, no PSP. So I waited for it to come out and got it with a brand new PSP 3002. It came with Star Wars Battlefront Elite Squadron and Toy Story 3 but I didn’t care about them, I wanted BbS. After Christmas 2010, I bought myself a PlayStation 3 with God of War III, Gran Torismo 5 and Ratchet and Clank. I bought it because they stopped making games for the PS2 (I think) and a lot of good games are on it and I'm waiting for Kingdom Hearts III to come out on it.

So there you go, that is what has happened to me with my gaming life. I am planning to get a Nintendo 3DS when Kingdom Hearts 3D comes out.

These reviews are my opinion on each game I played. I'll go through the gameplay, story and graphics aspects of each game. Each game will be rated out of XIII.

This game was fantastically, beautifully done in both gameplay and story wise. The gameplay was new and unique (for what I’ve played anyway). The story was good but the time I got to my third character's story, (Aqua) I knew what to expect. The Mirage Arena was great but I've never played multiplayer with it. The least thing I liked about BbS was the Command Board. It was fun but also repetitive after you got to the Neverland board. I thought the graphics at full were like Blu-Ray quality. I give it XI/XIII.

The first Kingdom Hearts game made and that I played. It was a good intro to the series. The gameplay was great for when it was made. This was my first ever RPG game, so I was used to X being jump Square being attack, so I had to adapt. When I was young, the story was a bit confusing but now that I'm older and smarter, I understand it perfectly. I understood the Disney aspect of it but the Final Fantasy aspect, I went (god I wish I knew these people better). I give this game VII/XIII.

I actually liked this game better than most people do. I thought the card's gameplay system was great, fun and challenging. Sleighting made the game more fun and it had to be used precisely. I thought the worlds' story were a little bit boring because they were pretty much the same as Kingdom Hearts' worlds just with re-worded but in the rooms of Castle Oblivion itself, were good. I liked the whole Reverse/Rebirth because you get to play as Riku and his story was to the point. I give this game VII/XIII.

This game was different to the other games. The main gameplay was good but the panel system wasn't all that great. I didn't like the limit on how much magic you could do but I thought the Limit Breaks were great. The story was kinda boring until Day 255, then it started to pick up. The normal gameplay graphics were good for a DS game and the Movie graphic were great. I'd put them right below or on par with the Kingdom Hearts II graphics. I quiet liked Mission Mode mainly because of the vast variety of characters to play. I give this game VII.V/XIII.

This is my favorite Kingdom Hearts game. the gameplay was good mainly because of the Drive addition and the combos were a lot more smoother to look at. The story was a little boring but overall it was good because there were more new worlds and some good old ones and you got to play as Sora's Nobody, Roxas which was good. the graphics were good. I give this game XII.V/XII.

This is my least favorite Kingdom Hearts game but I don't hate it. The gameplay was great each world's Keyhole was a different style of gameplay, which I enjoyed. also it had the very successful Birth by Sleep command deck but it was mainly extended. The story let this game down a lot. It was another copy of Kingdom Hearts I, which we didn't need and it was boring. The graphics were better than 358/2 Days so they were good. I give this game VI/XIII.

Beaten all three stories and the Final Episode: Ventus on Proud and Terra and Aqua on Critical.

Completed all of the Mirage Arena with Terra, Ventus & Aqua.

Obtained every Keyblade including Ultima Weapon.

Completed 100% of the Trinity Archives.

Defeated Vanitas Remnant with a level 75 & 80 Ventus on Proud.

Defeated Vanitas Remnant with a level 86 Terra on Critical.

Defeated Vanitas Remnant with a level 60 Aqua on Critical and level 50 on Standard.

Defeated Unknown with a level 99 Ventus on Proud.

Defeated Unknown with a level 50 Terra on Standard.

Defeated Unknown with a level 55 Aqua on Standard

Beat the entire game on Normal and Expert.

Obtained every Keyblade including the Ultima Weapon.

Completed all the Moogle Synthesis.

Met every character in Sora's Story.

Completed the game on Standard and Proud.

Completed all missions at 100%

Found all treasures in Story Mode.

Found all Unity and Ordeal Badges/Blazons.

Received all 358 Mission Crowns and all Freebies.

Completed the game on Beginner and Proud.

Obtained all Keyblades including the Ultima Weapon.

Received all Cups in Olympus Coliseum.

Completed all worlds including 100 Acre Wood.

Finished Jiminy's Journal (including the Synthesis Notes) (Excluding the Agrabah's Carpet Ride and Olympus Coliseum's Points in the Cups Missions).

Get all the Room of Rewards, Rewards in Sora's Story.

Get as many trophies as I can.

Here is what I think of Kingdom Hearts, just because a name is in the "Least Favorite" column, doesn't mean I hate it, it just means it's at the bottom of my "favorite list".

Some other things I like other than Kingdom Hearts are: Greek Mythology, so naturally I love Olympus Coliseum and the God of War games. I also like Sonic the Hedgehog, especially the originals and Black Knight. Pac-man is also one of my very favorite games EVER.

This is my User Box

. If you are my friend, I'll give you the code. 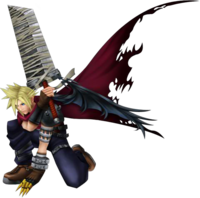