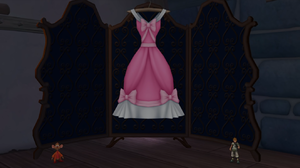 Jaq and Ventus present to Cinderella the dress they've made for her.

Cinderella's dress is a gown found in Kingdom Hearts Birth by Sleep. Ventus must find the necessary items within the Tremaine Manor in order to make it.

Cinderella, desiring to attend the Royal Ball, wishes to mend her mother's old dress into one suitable for her to wear, but is called away by Lady Tremaine before she gets the chance. Jaq, realizing that she will never have time to fix the dress, asks Ventus to gather materials around her house so they can do it for her. After Ventus gathers the White Sash, White Button, Pink Fabric, White Lace, and Pink Thread, Jaq decides the dress still needs a pearl, and Ventus sets out to find one. He sees one next to a sleeping Lucifer, who wakes up as he tries to get it. Jaq tries to distract the cat but fails, and Ventus saves him. He fights Lucifer while Jaq takes the pearl back to the dress. Upon defeating Lucifer, Ventus and Jaq finish the dress and present it to Cinderella, who greatly appreciates their effort. However, the dress is destroyed by Cinderella's evil stepsisters, Drizella and Anastasia, before she could leave for the ball.