From the Kingdom Hearts Wiki: A world of information not accessible by Gummiship
(Redirected from Beat)
Jump to navigationJump to search

"Once I take you down, yo, me and Rhyme is goin' back to where we belong!"
—Beat to Joshua

Daisukenojo Bito, also known as Beat, is a character who appears in Kingdom Hearts 3D: Dream Drop Distance. A native of Shibuya, he was taken to Traverse Town by Joshua alongside Neku, Shiki, and his partner Rhyme.

Beat, along with Neku, Joshua, Shiki, and Rhyme, is one of the first characters to appear in the Kingdom Hearts series who originated from something other than a Disney property, Final Fantasy, or Kingdom Hearts fiction, although he is from another game that is property of Square Enix, and is also designed by Tetsuya Nomura.

Beat is transported to Traverse Town along with Neku, Joshua, Shiki, and Rhyme when Shibuya was consumed by darkness. Still a player in the Reaper's Games, Beat tries desperately to find Rhyme out of concern for her and to complete the Game. Falsely convinced by a mysterious figure in a black coat (who he believed to be a Reaper), Beat believes that Joshua is to blame for their current situation.

Beat finally confronts Joshua and Riku in the Second District and summons a Dream Eater to attack them. Joshua tries to tell him that he has been tricked, but Beat writes it off as lies, saying that his "reverse psychiatry won't work this time." Riku quickly defeats his Spirits and Beat gives up out of frustration. Joshua attempts to comfort Beat as Riku blacks out.

Beat later appears in the Fifth District when Riku is tricked by Shiki and meets Young Xehanort face to face. Beat, finally seeing through the falsehood, tells Riku that he and Shiki had been tricked by Xehanort into believing that they could be transported back to their world if they delivered Riku to him. Confronting Xehanort directly, he tells him "I bet you aren't even a reaper." Xehanort then summons Hockomonkey and Riku pursues it into the Gardens.

After the battle, Beat and Rhyme are reunited through the efforts of Joshua, using Rhyme's dreams as a portal between the two "imaginings" of Traverse Town. Things go well for sometime until the Players receive the seemingly impossible mission of defeating Spellican, a Nightmare with the ability to summon hordes of other Nightmares and travel between the two imaginings of the town at will. With no one else to turn to, Joshua guides Sora and Riku back to Traverse Town and they once again aid the Players.

Beat and Rhyme track down the Spellican in the Fountain Plaza. Riku soon arrives and the three are distracted in a friendly conversation. All the while, the Spellican's rage is building and eventually escapes due to the group's distraction. Riku, Beat, and Rhyme pursue the Spellican through the back streets and into the Third District, where it teleports into the other imagining with no other route of escape. Joshua appears and delivers the news that Sora and the others are fighting the Spellican at that very moment. A Keyhole appears and Riku is whisked away to the next world.

Despite their efforts, the Spellican escapes to another world and the Players fail the mission. However, it is possible that since Sora eventually finds and defeats Spellican in the Symphony of Sorcery world, Beat and the others passed their mission because of him.

Beat is a muscular teenage boy with blue eyes and blonde hair covered by a black cap with a large skull on it. He wears a white tank top with red lining and a dark skull necklace, along with a black bracelet on his left wrist. He wears long beige shorts with an enormous chain on the left side, and red-and-black shoes.

Though he acts tough, Beat has a soft nature and gets embarrassed whenever people realize this, especially when others calls him by his real name. At the same time, Beat is very loud, impulsive, and tends to come to conclusions without reason. He is a little dense, but he eventually figures things out. Nevertheless, he is a kind-hearted person who would do anything for his friends. 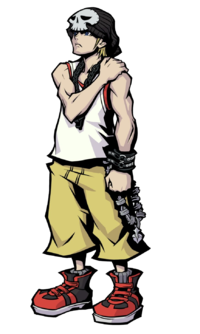 Beat is a character from Square Enix's The World Ends with You. After constantly fighting with his parents over his grade, Beat decided to run away from home. However, finding his sister, Rhyme, following him, Beat and his sister died when he attempted to save her from being hit by a car. Soon after, Beat finds himself in Shibuya's UG as a Player in the Reaper Game with Rhyme as his partner, though her memory was his entry fee. During the game, Beat meets Neku Sakuraba and Shiki Misaki, although the former offended him before agreeing for their two groups to team up. However, during the fourth day when they head to Towa Records, Beat learns that it was trap set up by the Reapers and Rhyme sacrifices herself to save him.

Saved by Sanae Hanekoma creating a pin from Rhyme's soul to keep him active, Beat confronts the Reapers about his inability to use the pin before being made into a Reaper himself. During the second week, learning the true nature of the Reapers and desiring to become the new Composer, Beat is given the mission to eliminate Neku and Joshua, but not carried it out for various reasons. When learning of Neku's entry fee of being the only player in the game, Beat renounced his Reaper to become Neku's partner to give him a fighting chance against the Noise. However, while forced to use Rhyme's Noise pin as payment, Beat learns that he would die as he failed to enact his duty as a Reaper. Luckily, after deciding not to destroy Shibuya, Joshua gives Beat and Rhyme a second chance in life.