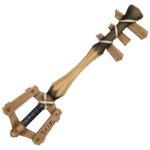 The Wooden Keyblade is a toy Keyblade that is seen in Kingdom Hearts Birth by Sleep. First belonging to Terra, he leaves it to Ventus.

Terra wields the Wooden Keyblade in a sparring match against Ventus and his Wooden Sword. After the match, he gifts it to Ventus while they discuss his dream of being a Keyblade Master.

Ventus later makes his way to Radiant Garden, fooling around with the toy Keyblade while contemplating a means of saving Terra from the darkness. Lea approaches him, taking the Wooden Keyblade in his own hands before speaking with Ventus and Isa, and challenging Ventus to a friendly fight. While exploring Neverland, Ventus leaves it in a treasure chest along with several wooden swords, which Aqua later discovers. Vanitas subsequently steals the Wooden Keyblade and confronts Aqua, telling her that Ventus has "outgrown" the toy before casually snapping the toy weapon in half, an act of cruelty that both horrifies and enrages Aqua. However, after defeating Vanitas, Aqua assures Peter Pan that it was all right when he shows concern over it, reassuring him that their friendship could not be broken so easily.

The Wooden Keyblade has an uncanny resemblance to the Ends of the Earth and the Kingdom Key, though it is missing a Keychain. Terra's name is carved into the guard. Made completely from wood, the handle is a dark brown in coloration, same for the tip. The teeth are placed unevenly on both sides, held together by rope, same as the hilt.